A Complete List of Twilight Movies in Chronological Order

The Twilight series consists of five movies depicted through the eyes of Bella Swan, one of the three leading characters in the books. Entertainism provides you a complete list of Twilight movies in chronological order, along with some fun trivia about the characters, cast, and films. 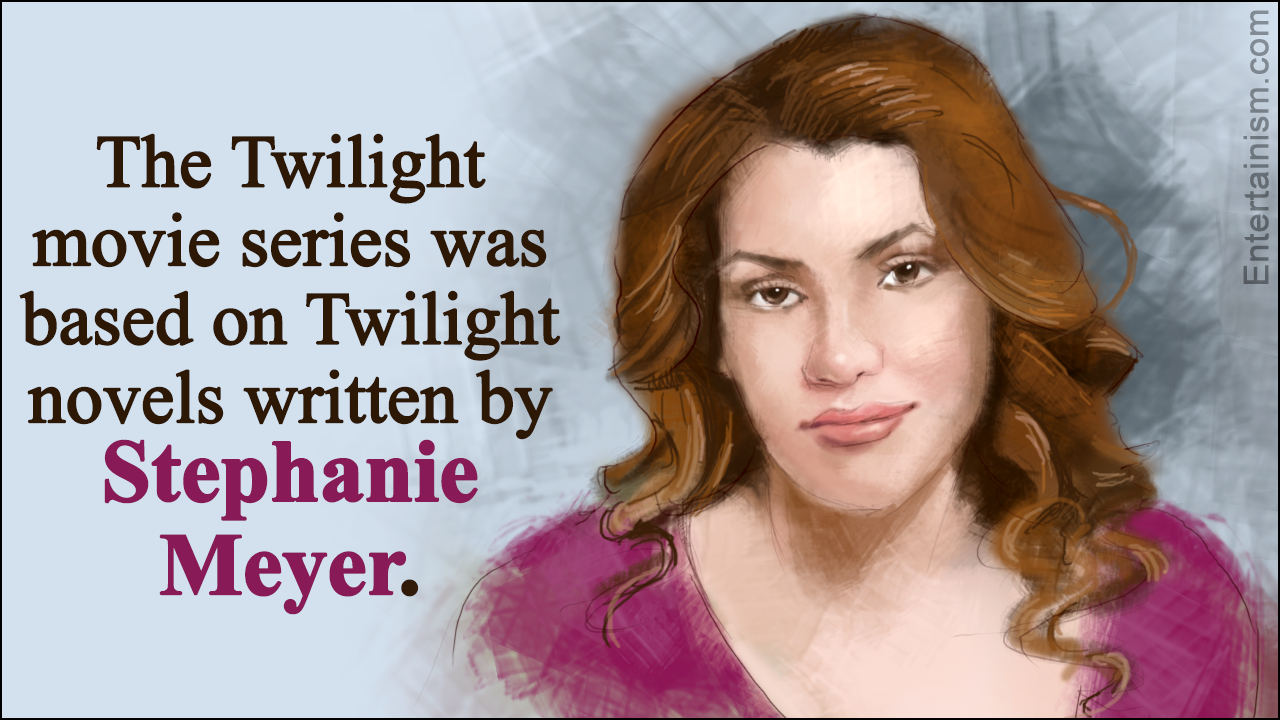 The Twilight series consists of five movies depicted through the eyes of Bella Swan, one of the three leading characters in the books. Entertainism provides you a complete list of Twilight movies in chronological order, along with some fun trivia about the characters, cast, and films.

The Twilight Saga  has had four different directors, one for each movie, but only one screenwriter―Melissa Rosenberg.

The five fantasy-romance film series is based on the Twilight  novels, written by American author Stephenie Meyer. All four books were published between 2005―2008, and with their immense popularity and commercial success around the world, came the film adaptations.

If you are one of the millions of fans obsessed with the series, here’s a list of Twilight  movies in order from first to last, with some cools facts along the way.

The films are based on the lives of three main characters―Bella Swan, a teenage girl, Edward Cullen, a 104-year-old vampire, and Jacob Black, a werewolf. Taking the world by storm, the Twilight  series didn’t just become a huge commercial success for the people involved in the project, but also changed their lives forever. Let’s take a look at the film series, starting from the very beginning.

Principal Cast in The Twilight Saga

* All the above mentioned cast members have pivotal roles throughout the series, and hence have been listed here.

The movie focuses on a clumsy, yet kind-hearted 17-year-old Isabella “Bella” Swan who moves to a small town named Forks to live with her father, Charlie Swan. At her new high school, Bella becomes mesmerized by the mysterious and handsome Edward Cullen (and of course, his family). Although everyone at school likes to keep a distance from the Cullens, and vice versa, Bella strangely finds herself getting drawn towards Edward. One thing leads to another, and she soon finds out that the Cullens are vampires. Even though she knows the truth, Bella falls for Edward.

As their love grows for one another, the arrival of the American Nomads―James, Victoria, and Laurent, stirs things up for all the wrong reasons. As James becomes fascinated by Edward’s protectiveness towards Bella, he becomes obsessed with killing her. Now, Edward and his family have to find a way to keep Bella safe, no matter what.

▶ For the baseball scene in Twilight, Nikki Reed and Jackson Rathbone are shown playing the game left-handed. Both had to learn to play it like that.

▶ The dress worn by Bella in Twilight  for prom cost only USD 20. On the other hand, the suit Edward wears was the most expensive clothing item in the movie.

▶ The coveted role of Edward Cullen in Twilight  was first thought to be portrayed by Henry Cavill, as he was Stephenie Meyer’s first choice. However, being 24 years old at the time, he was considered too old to play the part; and British heartthrob Robert Pattinson was cast for the role instead.

▶ The only reason Robert Pattinson auditioned for Twilight  was because he had appreciated Kristen Stewart’s work in “Into the Wild”. Before auditioning, he had never even heard of Twilight.

▶ When the American Nomads―James, Victoria, and Laurent in Twilight, first appear in the movie, they have little slippers on that are painted like bare feet.

In the second film, the entire Cullen family leaves Forks after Bella is almost attacked by Jasper on her birthday party. Thinking that Edward himself is endangering her life, he decides to leave Forks along with his family, and let her live in peace. After leaving town, the movie shifts focus on Bella and Jacob’s friendship/bonding/romance, and Jacob’s transformation into a werewolf.

Even though most of the storyline is focused on the werewolves, and how they came into existence, the second half of the movie does bring back the beloved vampires along with some not-so-good ones, the Volturi.

▶ Of all four books, New Moon  is Robert Pattinson’s favorite.

▶ Although the movie The Twilight Saga: New Moon  was released on November 20, 2009 in most countries, the Los Angeles premiere was on November 16, 2009; which in the lunar cycle was a new moon.

▶ For the coveted role of Edward Cullen in The Twilight Saga: New Moon,  even Jamie Campbell Bower (who plays one of the three ancient leaders of the Volturi) auditioned for the part.

▶ Bella’s cliff diving scene in The Twilight Saga: New Moon  was shot in a swimming pool in Vancouver. Both Kristen Stewart and Robert Pattinson had to put weights in their pockets for the scene.

▶ Each member of the wolf pack in The Twilight Saga: New Moon  had to submit papers as proof that they were of Native American descent.

After making a deal with the Volturi―Bella should be “changed” as soon as possible―Edward and the entire Cullen family is back in Forks. Edward now knows that he and Bella are meant to be together, and the only way he can keep her safe is by being close to her, always. However, Edward’s return hasn’t stopped Jacob from trying to win Bella over. But as Bella is trying to keep both men in her life happy, a revenge-hungry vampire from the past has come back to stir things up again.

▶ Kristen Stewart had to wear a wig in the film The Twilight Saga: Eclipse  as she had cut her hair quite short for the movie “The Runaways”.

▶ Actors Tom Felton and Channing Tatum in The Twilight Saga: Eclipse  were considered for the part of Riley Biers.

▶ Actresses Vanessa Hudgens and Miranda Kerr in The Twilight Saga: Eclipse  were considered for the part of Lean Clearwater.

▶ Twilight  and New Moon―Robert Pattinson had to pluck and wax his eyebrows. However, he refused to do so in The Twilight Saga: Eclipse  film.

▶ September 13 is Bella’s birthday. The movie The Twilight Saga: Eclipse  was re-released on September 13, 2010 in theaters to celebrate it.

Film studio Summit Entertainment  decided to split the fourth novel into a two-part film, and in the first part, we see Bella and Edward getting married. All seems amazing until they leave for their honeymoon where they consummate their marriage, and Bella discovers that she’s pregnant.

With the baby growing at an accelerated rate, they rush back home so that Carlisle can fix things. But Bella wants to keep the baby despite being frail and unable to take care of herself. Now the werewolves are on the alert that a vampire baby is about to born, and want to nip this issue in the bud. Will they be successful, or can the Cullens and Jacob save Bella and her baby?

▶ The back of Bella’s wedding gown has 152 buttons along with 17 buttons on each sleeve.

▶  In Breaking Dawn – Part 1, even though Robert Pattinson was provided boat driving lessons, he crashed it not just during the lessons, but while filming the scene in Brazil.

▶ While filming the birth scene, both Robert Pattinson and Taylor Lautner would struggle to keep themselves from laughing; especially when their characters Edward and Jacob, respectively tried to bring Bella back to life.

In the fifth and final installment, we see that Bella has transformed from a human to a vampire, and is stronger than ever. With her new family by her side, there’s nothing she can’t handle. Things seem normal, and Renesmee (Edward and Bella’s daughter) is growing at a rapid pace. All seems well until one day, out in the woods, Irina sees Bella and Jacob with Renesmee, and instantly believes that she’s an immortal child. She runs to the Volturi and reports to them about what she saw. Seeing their chance, the Volutri decide to pay the Cullens a visit.

The Cullens decide not to fight with the Volturi, but gather witnesses to prove that Renesmee is not an immortal child. As the arrival of the Volturi nears, so does the tension as to what will happen in the end.

▶ Apart from Mackenzie Foy in Breaking Dawn – Part 2, there were 10 other child actresses and a CGI-animated baby who portrayed Renesmee to show her at different growth stages.

▶ In order to protect Mackenzie Foy in Breaking Dawn – Part 2, director Bill Condon had a “swear jar” for the cast and crew members. Whoever uttered profanities or used cuss words in front of her would have to put money in the jar. All the money collected was donated to St. Jude Children’s Research Hospital.

▶ In Breaking Dawn – Part 2, Dakota Fanning says only one word in the movie―pain.

▶ From the entire Twilight  series, this is the only installment that has a complete opening credit sequence.

▶ The final word shown in the end credits of Breaking Dawn – Part 2―forever―is also the final word in the novel.

If you haven’t seen the movies yet, we’d urge you to read the books before  catching up with the film series. Although the films have gained massive success, some alterations were made while making each of the films. As for the Twilight  loyalists, we hope that this article was an acceptable summation of the series.