Famous Quotes from ‘A Christmas Story’ That Will Spark a Smile

The essence and spirit of Yuletide is simply contagious. Our perfect idea of Christmas would be sitting in the inglenook of a fireplace, enjoying deep drafts of eggnog & ale and watching the holiday classic 'A Christmas Story'! This Entertainism article presents to you famous quotes from 'A Christmas Story', Hohoye! Consider this as a Christmas gift, folks, the one that's tenderly wrapped with humor and homeliness. 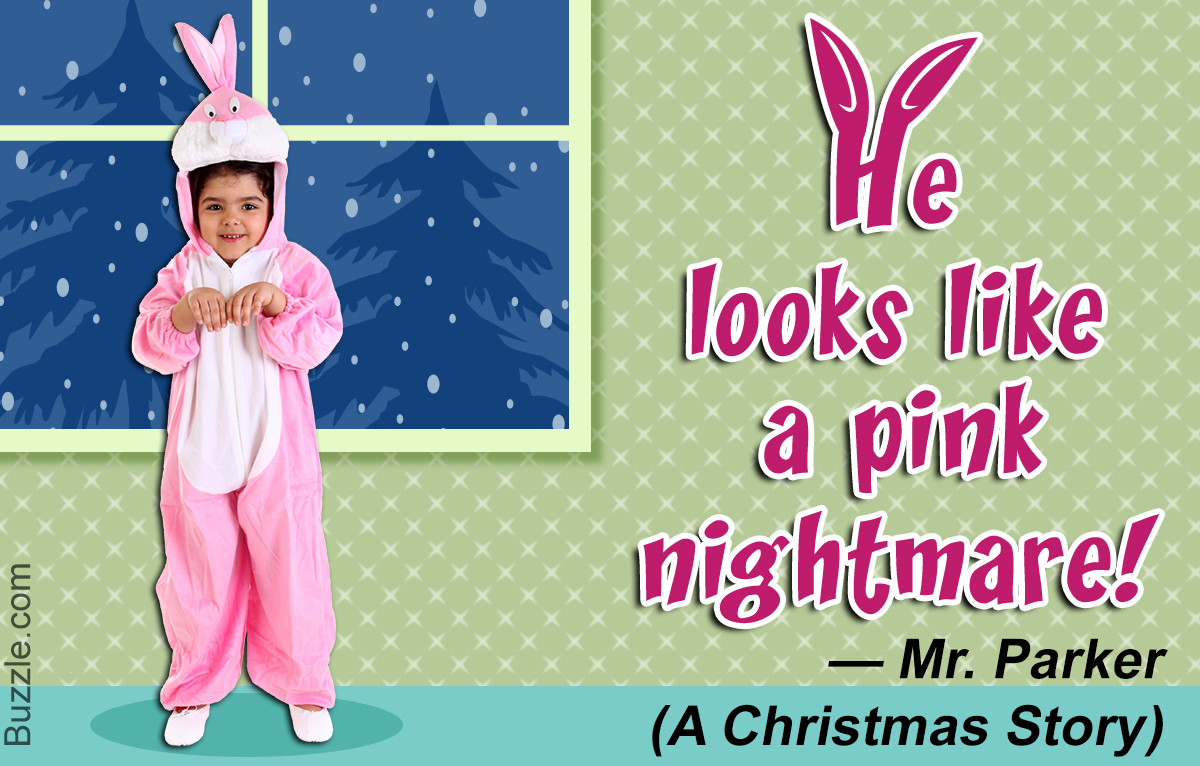 The essence and spirit of Yuletide is simply contagious. Our perfect idea of Christmas would be sitting in the inglenook of a fireplace, enjoying deep drafts of eggnog & ale and watching the holiday classic ‘A Christmas Story’! This Entertainism article presents to you famous quotes from ‘A Christmas Story’, Hohoye! Consider this as a Christmas gift, folks, the one that’s tenderly wrapped with humor and homeliness.

The last scene of the movie which shows the Parker family eating dinner at a Chinese restaurant is probably the most genuine scene of the movie as the actors really had no idea that the Chinese waiters were going to warble. The actors didn’t really have to feign a laugh, it came naturally.

The memories we all have with this heartwarming story just makes me feel like one of those cloyingly mawkish mommies who will have tears welled up instantly when she goes through family albums. This movie gets itself stuck on us just like the way Flick gets his tongue stuck to a flagpole. Every little precocious bespectacled blither reminds us of Ralphie and that dropping of “fudge” word scene seems so damn associable, we’re sure like him, your first ever F bomb dropping must have yielded in well-earned punishment. Haha.

The reason why this story is so relatable is because – we all are, as the Parker family, a little (okay, total) bonkers, where every normal situation is prone to morph into a hilarious snafu. We are sure there’s one object of conflict like the infamous stiletto-heeled-fishnet-stocking leg lamp that pesters your mother but pleases your father. This also puts me in mind of a childhood incident where my mother would implant scary thoughts in my tender kid mind that I’d lose my body parts one by one if I demanded for unreasonable gifts (this would happen every Christmas and okay, everyday), clearly an inspiration taken from “You’ll shoot your eye out”. Parents know how gullible we little kids are. As mentioned earlier the memories associated with this movie are too many, and the writer is susceptible to get carried away, so, we think it’s time for famous ‘A Christmas Story’ quotes.

Famous Quotes from ‘A Christmas Story’

Ralphie: Oooh fuuudge!
Ralphie as Adult: [narrating] Only I didn’t say “fudge.” I said THE word, the big one, the Queen-Mother Of Dirty Words, the “F-dash-dash-dash” word!
Mr. Parker: [stunned] WHAT did you say?
Ralphie: Uh, um…
Mr. Parker: That’s… what I thought you said. Get in the car. Go on!

Mr. Parker: What is the name of the Lone Ranger’s nephew’s horse?
Mother: Ah… Victor! His name is Victor.
Mr. Parker: How the hell did you know that?
Mother: Everybody knows that!

Mother: Randy? What’s wrong? Whatcha cryin’ for?
Randy: Daddy’s gonna kill Ralphie!
Mother: No he’s not…
Randy: Yes he is!
Mother: No, I promise, Daddy is not going to kill Ralphie!

Randy: Meatloaf, smeatloaf, double-beatloaf. I hate meatloaf.
Dad: All right, I’ll get that kid to eat. Where’s my screw driver and my plumber’s helper? I’ll open up his mouth and I’ll shove it in.

Flick: Are you kidding? Stick my tongue to that stupid pole? That’s dumb!
Schwartz: That’s ’cause you know it’ll stick!
Flick: You’re full of it!
Schwartz: Oh yeah?
Flick: Yeah!
Schwartz: Well I double DOG dare you!
Narrator (Ralphie as an adult): NOW it was serious. A double-dog-dare. What else was there but a “triple dare you”? And then, the coup de grace of all dares, the sinister triple-dog-dare.
Schwartz: I TRIPLE-dog-dare you!
Narrator (Ralphie as an adult): Schwartz created a slight breach of etiquette by skipping the triple dare and going right for the throat!

“In the heat of battle, my father wove a tapestry of obscenity that as far as we know, is still hanging in space over Lake Michigan.”
-Adult Ralphie

“Over the years I got to be quite a connoisseur of soap. My personal preference was for Lux, I found that Palmolive had a nice, piquant after-dinner flavor – heady, but with a touch of mellow smoothness. Lifebuoy, on the other hand… (Yechh!)”
-Adult Ralphie

“Of course! Santa! The big man! The head honcho! The connection! [chuckles] Oh, my mother had truly messed up this time!”
-Adult Ralphie

“My old man’s spare tires were only actually tires in the academic sense. They were round and had once been made of rubber.”
-Adult Ralphie

“Some men are Baptists, others Catholics. My father was an Oldsmobile man.”
-Adult Ralphie

“It was all over. I was dead. What would it be? The guillotine? Hanging? The chair? The rack? The Chinese water torture? Mere child’s play compared to what surely awaited me!”
-Adult Ralphie

“Every family has a kid who won’t eat. My kid brother had not eaten voluntarily in over three years!”
-Adult Ralphie

“Was there no end to this conspiracy of irrational prejudice against Red Ryder and his Peacemaker?!”
-Adult Ralphie

“We plunged into the cornucopia quivering with desire and the ecstasy of unbridled avarice.”
-Adult Ralphie

“Oh, life is like that. Sometimes, at the height of our revelries, when our joy is at its zenith, when all is most right with the world, the most unthinkable disasters descend upon us!”
-Adult Ralphie

“Scut Farkus! What a rotten name! We were trapped. There he stood, between us and the alley. Scut Farkus staring out at us with his yellow eyes. He had yellow eyes! So, help me, God! Yellow eyes!!”
-Adult Ralphie

“Now, I had heard that word at least ten times a day from my old man. He worked in profanity the way other artists might work in oils or clay. It was his true medium; a master.”
-Adult Ralphie

“You used up all the glue on purpose!”
-Mr. Parker

“He looks like a deranged Easter Bunny”
-Mr. Parker

This zany comedy is a series of vignettes with one common plot that binds them all – Ralphie’s quest for his BB gun. If you are someone who wants to enjoy the holiday season flecked with frivolity and a certain edge, then ‘A Christmas Story’ is just your thing.