Hard-hitting and Famous Quotes from ‘The Departed’

"I'm shipping up to Boston!" is a well-known song from the movie 'The Departed', which released in 2006, and also is the OST of the same. Apart from its spectacular music tracks, this movie is also known for its bold, abusive, and straightforward dialogs and lines, which showcase the life of gangsters and criminals quite effectively.

Home / Music / Hard-hitting and Famous Quotes from ‘The Departed’

"I’m shipping up to Boston!" is a well-known song from the movie ‘The Departed’, which released in 2006, and also is the OST of the same. Apart from its spectacular music tracks, this movie is also known for its bold, abusive, and straightforward dialogs and lines, which showcase the life of gangsters and criminals quite effectively.

The budget of the movie ‘The Departed’ was about USD 90 million, and it grossed almost USD 290 million worldwide. It was a blockbuster in terms of various aspects, and is said to be one of the most successful films made by Martin Scorsese.

If you want a feel of the old classic American gangster life, then ‘The Departed’ is surely a movie worth watching at least once. Directed by Martin Scorsese, this film got several critical acclaims, and even won the Best Director Academy Award in 2007. It also received several nominations, including one wherein it was nominated for the AFI’s list of Top 10 Gangster movies. This movie is actually a remake of a criminal-thriller film called ‘Infernal Affairs’, which was directed by Andrew Lau and Alan Mak from Hong Kong.

‘The Departed’ boasts of an amazing cast, that comprises Matt Damon, Leonardo DiCaprio, Jack Nicholson, Martin Sheen, Mark Walhberg, besides others. Characterized by American-Irish style gangster-related activities in Boston, Frank Costello (Nicholson) plays a dreaded mafia leader, who establishes a spy in the form of a police officer in the Special Investigations Unit of the Massachusetts State Police. Around the similar time, Billy Costigan (DiCaprio) is planted as a spy from the police in Costello’s gang with the help of Sergeant Dignam (Wahlberg) and Captain Queenan (Sheen). Both moles try to uncover the others’ identity, resulting in a final showdown along with the killing of Costello.

The movie is quite famous for its dialogs, many of which are abusive and vulgar. The following sections will present the most famous quotes by the main movie characters:

“Two pills… Why don’t you just give me a bottle of scotch and a handgun to blow my fucking head off?”

“What are you waiting for? You want it to chop me up and feed to poor? Is that what you guys want?”

“Families are always rising or falling in America, am I right?”

“I’m all set without your own personal job application. Alright, Sergeant?”

“Look at it this way: You’re a black guy in Boston. You don’t need any help from me to be completely fucked.”

“I’m going fucking nuts, man. I can’t be someone else every fucking’ day. It’s been a year of this. I’ve had enough of this shit!”

“You accuse me once, I put up with it. You accuse me twice… I quit. You pressure me to fear for my life and I will put a fucking bullet in your head as if you were anybody else. Okay?”

“They knew you had cameras in the building! They knew everything, alright? There is a leak from the inside! It’s real, man, smoke him out!”

“Do you want him to chop me up and feed me to the poor, huh, is that what you want?”

“Look, I got boxes of tapes, evidence, all of that! I got proof! He’s Costello’s rat!”

“Know, bad haircut, no dress sense, and, you know, a slight air of scumbag entitlement.”

“Christ. I mean, a guy comes in here against every, every instinct of privacy and self-reliance he has and what do you do? What do you do, huh? You send him off on the street to score smack, is that what you do? You’re fucking ridiculous!” 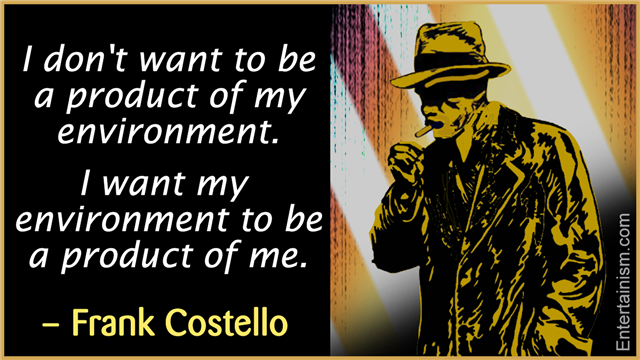 “I’m concerned about a Chinaman who thinks it’s wise to come to a business transaction with automatic weapons. For his own good, tell Bruce Lee and the Karate Kids that none of us are carrying automatic weapons. Because here, in this country it don’t add inches to your dick. You get a life sentence for it.”

“I got this rat. This gnawing, teething rat.”

“I haven’t needed the money since I took Archie’s milk money in the third grade. Tell you the truth, I don’t need pussy any more either… but I like it.”

“The only one that can do what I do is me. Lot of people had to die for me to be me. You wanna be me?”

“How’s Sister Mary Teresa doing? Had a tasty relationship before she took her vows.”

“If these chinks wanna nuke Taiwan anytime in this century, they better shape up and show me 1 million dollars!”

“Colin, laying low is not what I do.”

“When I was your age they would say we could become cops or criminals… What I am saying to you is this… When you are facing a loaded gun, what’s the difference?”

“You know, if your father were alive, and saw you here sitting with me, let’s say he would have a word with me about this. In fact, he’d kill seven guys just to cut my throat, and he could do it. That’s maybe something you don’t know about William Costigan, Sr.”

“What Freud said about the Irish is: ‘We’re the only people who are impervious to psychoanalysis.’ “

“Alright, alright. I can get you your money!”

“I can’t wait to see you explain this one to a fucking Suffolk County jury you fucking cocksucker.”

“What is this? A citizens arrest? Blow me. Only one of us is a cop here Bill.”

“That’s the stupidest thing you could do.”

“Fuck you, fucking’ queers. Firemen getting pussy for the first time in the history of fire or pussy. Hey go save a kitten in a tree, you fucking homos.”

“I’m a sergeant in the Massachusetts State Police… who the fuck are you? I erased you!”

“You got a nice suit at home or do you like coming to work everyday dressed like you’re going to invade Poland?”

“The day you wouldn’t take a promotion, let me know. And if you’d taken care of this, I wouldn’t even be here.”

“I’m gonna need the identity of your undercovers.”

“Do you know what will happen if you shoot me?”

“I gotta find the guy you got in the department.”

“No, what you do, the degrees and everything you got, you’re hot shit. So why do you make as much as a guidance counselor?”

“I think you better call your mother, and tell her you won’t be home for supper.”

“All cell phone signals are under surveillance, due to the courtesy of our Federal friends over there.”

“A lot of guys just want to appear to be cops. Gun, badge, and they pretend they’re on TV.”

“One of you mugs got a light.”

“I’m really sorry…I swear to God I am. I’ll get you out of this. It won’t be immediately but I will get you out. Two weeks at most.”

“Do you want to be a cop or only look like a cop?”

“Staff Sergeant Dignam has a style of his own. I’m afraid we all have to get used to it.”

“Congratulations on passing the detectives’ exam and welcome to the Special Investigation Unit.”

“For Christ sake, be smart. If anybody’s watching us now, how are we not supposed to arrest you? Come on, get in the car. Both of you, get in the car!”

“Hey, I forgot the password, but if you’d like to come down to the garage with me, I’d be happy to give it to you.”

“The F.B.I. are like mushrooms, you feed them shit and keep them in the dark.”

“I’m the guy who does his job. You must be the other guy.”

“This is unbelievable. Who put the fucking cameras in this place?”

“That wasn’t a joke. Just because you play a tough guy, doesn’t mean you are one you lace-curtain, Irish fucking pussy!”

“You have different accents? You did, didn’t you? You little fucking snake. You were like different people.”

“Yeah, a lot of people just wanna slam a nigger’s head through a plate-glass window.”

“Exactly. You’re nobody. You signed the papers, remember? Now we’re the only two people on the face of this earth that even know you’re a cop. How about we just erase your file, huh? How ’bout that? How about we erase your file and then bang, you’re just another soldier for Costello open to arrest for I don’t know how many felonies. Huh? What do you say we do that, Captain?”

“Why don’t we just meet up sweetheart? Let me buy you an ice cream.”

“Yeah, how do we do that Mr. Genius who didn’t even graduate from the academy?”

“He’s not here. You want to meet up or you got something real, call me back.”

The quotes above give us an idea of how the American gangster life works, by having a brash, to-the-point, and in-your-face kind of attitude. This movie is said to be loosely-based on two real life people called Whitney Bulger and John Connolly. Bulger was a gangster while Connolly was a corrupt police officer.