You May Not Have Heard These Fat People Jokes Before

Looking for some jokes that aren't tired, or worse, repetitive? Then this article will definitely interest you as it has fresh and comical jokes. 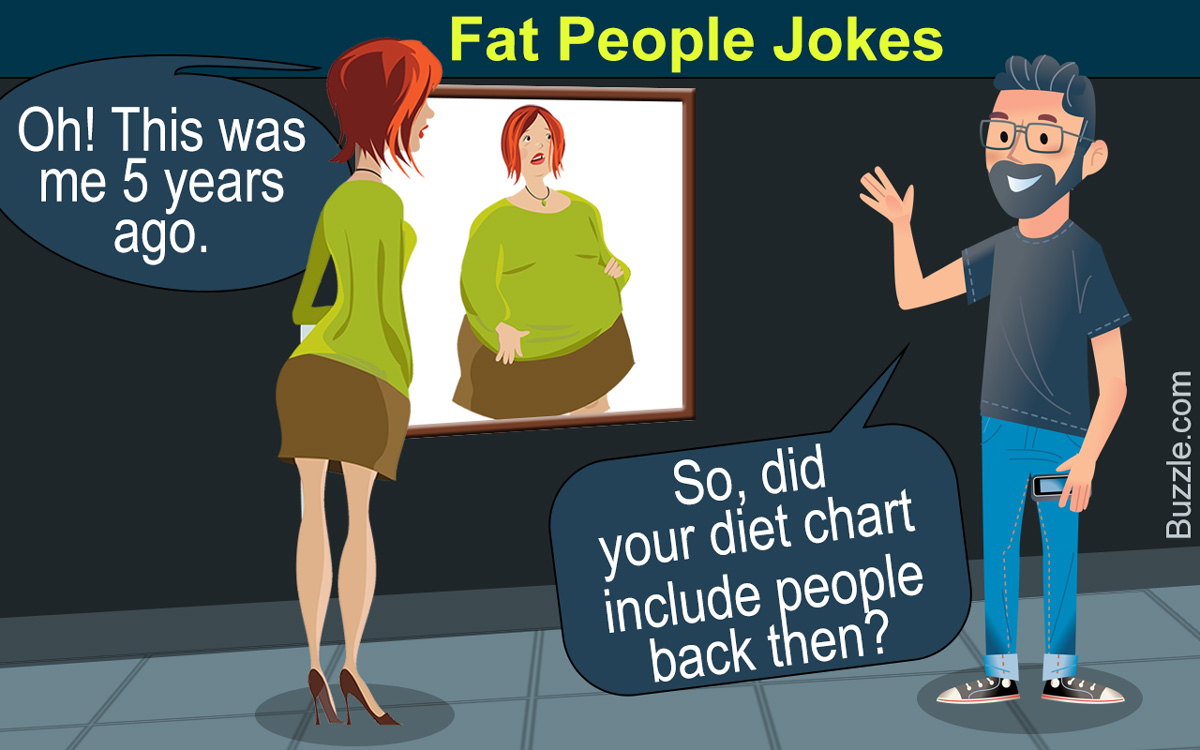 Looking for some jokes that aren't tired, or worse, repetitive? Then this article will definitely interest you as it has fresh and comical jokes.

As a young girl, Sasha always used to get teased because of her weight. It wasn’t her fault that she was overweight, but would constantly get taunted by her so-called friends at school. Every night she would pray to God that somehow she can get thin and pretty like the other girls in school. She cried herself to sleep, woke up each morning dreading school, and couldn’t wait to run back home to hide herself. One day, Sasha’s mom saw her sitting by the window, overlooking her friends playing in the street. She wanted to join them, but was scared that some kid might make fun of her being heavy. That was the moment when Sasha’s mom came to her and said these words, “You’re not fat honey, you’re fluffy. And I love you just the way you are.”

The lady went to the theater before the night’s performance was going to begin. She was looking for the usher to help her with a dilemma regarding her seats.
Usher: I see you have two tickets with you. Will someone be joining you ma’am?
Lady: Well, you see, I have an issue with sitting in just one seat. It is a bit uncomfortable for me and that’s why I had to buy two different tickets. Both these tickets are mine, that I can guarantee you.
Usher: That’s alright with me ma’am. Although there’s one problem. You see, you have two seats with numbers 52 and 61.

A woman (you can say is a bit large) was crossing the street, and gets hit by a car. She turns to see who’s driving it and see a blonde girl.
Fat lady: Have you lost your mind? Can’t you see I’m walking here? You could’ve easily driven around me!
Blond girl: I am sorry lady, I didn’t think I had enough gas!

At the scale manufacturers’ convention, many people would get excited to see which machines would give them the exact weight. But some visitors would try to avoid this as much as they could as they didn’t wish to advertise their actual weight in public. A smooth-talking salesman convinced a woman to get on the scale and promised her that no one would look at the weight once she’s on it. He also promised that she would be the only to see her weight and that she can also cover the display with a cloth, if she pleased.
She finally got on the scale, and in couple of seconds, the mechanical voice from the machine yelled: One hundred and sixty-three.

Lady: Doc, can you please prescribe me something so I lose weight as soon as possible. I got a really wonderful gift from my husband, it’s for our anniversary. And I would like to get into it by tomorrow night.
Doctor: Alright then, come over tomorrow morning and I will provide you with a prescription. I guess then you might be able to get into the new dress your husband bought you.
Lady: Dress? Who said anything about my husband buying a dress? I was talking about a car.

There’s a huge woman lying on the beach, getting a tan. Later in the day, a lifeguard comes to her and says…
Lifeguard: Excuse me ma’am, but when do you plan to leave the beach?
Lady: Why? What’s the matter?
Lifeguard: “Well, the thing is, it’s pretty late in the evening and the tide wants to come in.

Two guys were walking down two different streets. They meet each other at an intersection and look at each other intently.
Fat man to the other: Seems like someone’s been through a famine.
Skinny man replied: Now I know who caused it.

I know that these jokes can be a touchy subject as no sane individual would even dream of hurting someone on purpose. But you can’t help but wonder, how can people come up with such funny jokes? Perhaps some people might get offended with the contents of the joke, I want you to know that my intentions were not to do so.