If You Liked Troy, You’ll Idolize These 10 Greatest War Movies Too

The incidents and legends of history have fascinated us from time immortal, and when it is combined with our love for movies, something magical is born. We bring you a list of popular movies like Troy, which set the benchmark and got us asking for more.

Home / Actors / If You Liked Troy, You’ll Idolize These 10 Greatest War Movies Too 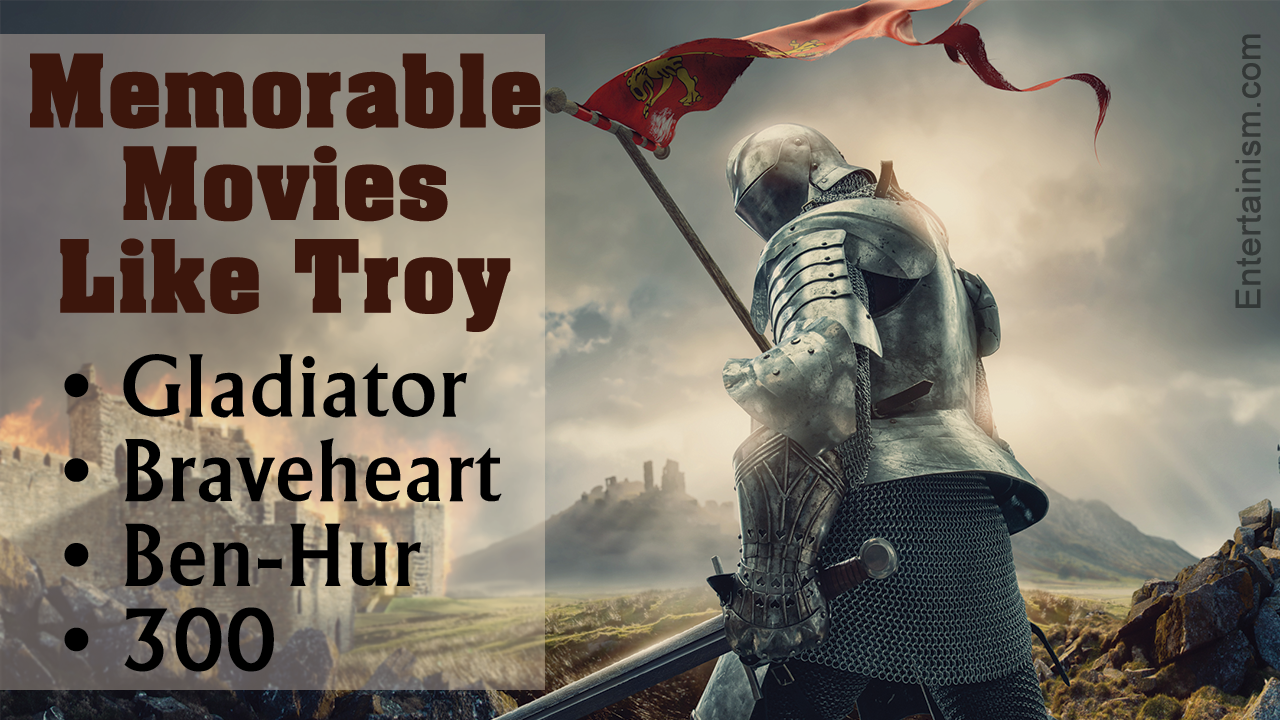 The incidents and legends of history have fascinated us from time immortal, and when it is combined with our love for movies, something magical is born. We bring you a list of popular movies like Troy, which set the benchmark and got us asking for more.

The story of Troy is based on the epic poem Iliad by Homer, which narrates the story of the Trojan War, which lasted for 10 years.

History has shared with us many epic legends and the stories that are attached to them. They say that history is a lesson taught, in order to learn from the past and to avoid making mistakes in the future. But history stands for so much more than that. It teaches us about the life and times of the people back then, their lifestyles, their hopes, dreams, fears, victories, losses, motivations, and grief. It paints a picture of the bravery, loyalty, hardships, and achievements that teach us something valuable and inspire us.

Movies have long learned from books and passages of history, take from the narratives and bring to life the events from the past, and have, thus, given people a means to not just imagine what the past was like, but to see and experience it as well. Historical war movies like Troy have captivated audiences immensely from across the globe and got us asking, “Which other movies are similar, and as good?”. And this is what we came up with!

Here’s our list of the top movies that are similar to Troy, along with some information on each.

Description: It is a fictional war drama that is crediting with reviving viewers’ interest in historical dramas. It is based on a fictional Roman general named Maximus Decimus Meridius, who is reduced to the ranks of a slave after Commodus, the ambitious son of Marcus Aurelius, kills his own father in order to seize the throne. It traces how Maximus regains his status by rising in the ranks of gladiatorial fights and attempts to avenge the murder of the former king and his own family. It gained critical acclaim, winning 5 Oscars for Best Picture, Best Actor in a Leading Role, Best Visual Effects, Best Sound Mixing, and Best Costume Design. It has also won 4 BAFTA Awards and 2 Golden Globe Awards.

Description: Based on a comic series by Frank Miller and Lynn Varley of the same name, 300 is a historical fantasy drama that is based on the Battle of Thermopylae, which was a part of the epic Persian wars. It is the story of King Leonidas, who wages a war against the Persian god-like king Xerxes, along with 300 of his Spartan soldiers. It is presented in a narrative form with the Spartan soldier Dilios telling the story and introducing the characters. It employed the superimposition chroma key effects in the making of the film. It was nominated for 5 MTV Movie Awards in 2007, but only won the award for Best Fight. It also received 10 Saturn Awards nominations, won 2 Golden Icon Awards, the IGN Movie of the Year Award in 2007, and is ranked #5 in the National Review Magazine’s list of 25 Best Conservative Films of the Last 25 Years.

Description: Although highly inaccurate in its representation of facts, Braveheart was critically acclaimed. It is based on the 13th Century Scottish Warrior, William Wallace who led the Scots against King Edward I of England in the First War of Scottish Independence. It is based on the epic poem “The Actes and Deidis of the Illustre and Vallyeant Campioun Schir William Wallace”. It received 5 Oscars and 10 nominations, 4 Golden Globe nominations and 1 Award, 7 BAFTA nominations and 3 Awards, and one 1st Empire Award.

Description: Captured by one of the most renowned directors in film history, the movie was an accompaniment to his other movie “Flags of Our Fathers”. The former shows the Battle of Iwo Jima from the perspective of the Japanese soldiers, while the latter is shown from the American soldiers’ angle. It is based on a novel by Tadamichi Kuribayashi named “Picture Letters from Commander in Chief”. It received 1 Oscar for Best Sound Editing (3 other nominations), 1 Cinema for Peace Award at the Berlin Film Festival, the Best Foreign Language Film at the 12th BFCA Critics’ Choice Awards (2 other nominations), 2 Golden Globes (1 other nomination), and 6 other nominations. It has has 24 Top 10 listings in various compilations of “Top” films, out of which 22 are in the Top 5, and four other general Top 10 listings.

Description: Another legendary film that has changed the face of historical drama is the movie adaptation of the 1880 novel “Ben-Hur: A Tale of the Christ” by Lew Wallace. It follows the story of Ben-Hur, a wealthy prince and merchant, whose motive is to fight for the freedom of his people, but is betrayed by his childhood friend Messala, who is now the commander for the Roman garrison. Ben-Hur is imprisoned, and upon his return, vows to take revenge for the same. The music scores and chariot race scenes have become one of the most influential and famous sequences in film history. It was nominated for 12 Oscars, and won an epic 11 out of them, a record only matched much later by Titanic and Lord of the Rings: The Return of the Kings. It also received 5 Golden Globe nominations winning 4, 1 BAFTA Award, the New York film Critics Circle Awards for Best Film, and a Directors Guild of America Award for Outstanding Achievement in a Motion Picture for its direction. It has also appeared on numerous “Top (n)”, and “Best of” lists.

Description: Based on Japanese history, it is set in the Sengoku Period, and revolves around a small-time criminal who is hired by one of the clans in order to impersonate their dying warlord and to prevent the opposing clan from attacking this new and amateur clan. “Kagemusha” stands for a political decoy, which is portrayed by Tatsuya Nakadai playing the warlord, who is turn is based on a renowned daimyo (powerful feudal lords in Japan) by the name of Takeda Shingen. It was nominated for 2 Oscars, received the Palme d’Or at the 1980 Cannes Film Festival, won 2 BAFTA Awards (was nominated for 4), was nominated for a Golden Globe, won the Caesar Awards, and 2 David di Donatello Awards.

Description: Another legendary film by Kurosawa, it was the last in his line of epic war movies. It is a Japanese-French jidaigeki epic story based on the sagas of the daimyo Mōri Motonari, along with inspiration taken from “King Lear” by Shakespeare. It tells the story of an aged Hidetora Ichimonji, a powerful warlord from the Sengoku Period, who gives up his position for the sake of his three sons, amongst whom he divides his kingdom. It is considered to be one of Kurosawa’s greatest works, although initial reception didn’t seem to reflect that. It ended up winning 1 Oscar (nominated for 3), 1 Golden Globe, was nominated for 6 nominations from the Awards of the Japanese Academy (won 2 of the same), and 2 BAFTA Awards.

* RAN stands for revolt or uprising in Japanese.

Description: A legend in the film industry, Kubrick has directed movies like the 2001: Space Odyssey, A Clockwork Orange, The Shining, and Full Metal Jacket, amongst others. Spartacus was his 1960 film that was based on a novel by Howard Fast of the same name. It tells the story of Spartacus (played by Kirk Douglas), a historical Roman figure, and the events that occurred in the Third Servile War. It gained 6 Oscar nominations, winning four out of the same for Best Actor in a Supporting Role, Best Art Direction, Best Cinematography, and Best Costume Design.

Description: Another highly controversial film by Mel Gibson, attacked for being inaccurate, and a little offensive to some, the film was nonetheless a great piece of work. It portrayed the journey of a Mesoamerican tribesman who has to protect himself and save his family from human sacrifice after his village is captured and destroyed. It is set in Petén, Guatemala in the year CE 1511. Despite the criticism it received, it was nominated for 3 Academy Awards, 2 Saturn Awards, 1 ASC Award, 1 BAFTA Award, One Golden Globe, and 8 other nominations from various Award Shows. It also won 1 COFCA Award, 1 DFWFCA Award, 2 FAITA Awards, 2 Imagen Awards, 1 Golden Reel Award, and 1 PFCS Award.

LEGENDS OF THE FALL

Description: It is based on Jim Harrison’s 1979 novella by the same name. It follows the lives of the Ludlows, a Cornish family, mainly the three brothers and their father, who lived in the wilderness in the early 1900s, a decade before World War I through to the Prohibition era, into the 1930s, and a small scene in 1963. It chronicles how their lives were affected by war, love, and nature, and their struggles with the same. It gained 2 Oscar nominations, winning one for Best Cinematography, and 4 Golden Globe nominations.

We have given you some good (or rather great!) movies like Troy, which have captivated us, intrigued us, and helped us develop an interest in history and explore the nuances of the same. As long as there is history, their will always be a great story to tell, and ever so often portrayed on the silver screen. This is a list of the best there is so far, but we await the many more that will follow suit in the future. If you haven’t already watched any, we suggest you watch some of these brilliantly depicted movies, and if you think we missed out on something, let us know. Enjoy!