In this article, you will find the list of top 10 action movies of the 90s and the 21st century. If you have seen all these movies mentioned in the article, you my friend are a certified action movie junkie. 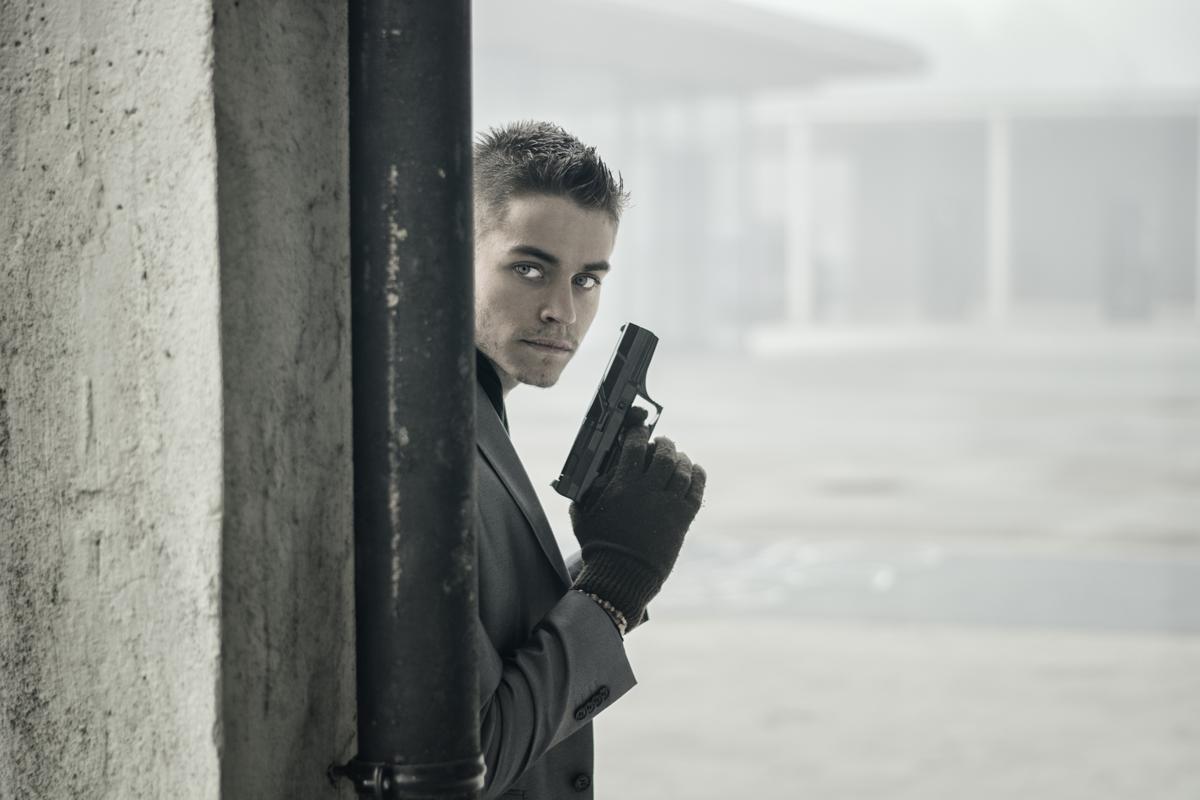 In this article, you will find the list of top 10 action movies of the 90s and the 21st century. If you have seen all these movies mentioned in the article, you my friend are a certified action movie junkie.

Compiling a list of top action movies is a bit simpler because I don’t really have to look too far for them. When we go to the theaters or rent DVDs at home, we want these movies to be filled with fast, heart-pumping, furious action with good acting as well. What keeps us on the edge of our seats are the pace of the movie and cutting edge special effects. Keeping all these major factors in mind, we have put together a list of top movies which were released in 90s and from 2000 – 2012.

Movies Released in the 90s

No matter, whether you’re a guy, biologically predisposed to love these movies, or a typical “girlie” girl, these top 10 flicks will definitely appeal to you all masses.

Sci-fi, action, and adventure blockbuster combined, Keanu Reeves is shown leading two different lives. During the day, he’s an average computer programmer, but by night, he’s a malevolent hacker called “Neo”. The story balances on the concept of “what reality is” and “is truth really far beyond anyone’s imaginations”. At first, this trilogy can be a bit over-the-top for some, but when you really let your mind wonder, accept the unthinkable, you would see “the truth”.

Arnold Schwarzenegger returns to the big screen with his most-loved role of a cyborg sent back in time to protect John Connor, portrayed by Edward Furlong. The reason to put this movie is clear to almost all futuristic, sci-fi loving, moving-going person.

What captures audiences in Saving Private Ryan is the opening 30-minute war scene, which is the best first half-hours of any action movie made. The story follows Captain John Miller, portrayed by Tom Hanks, being sent on a WWII rescue mission. He has to find paratrooper Private James Ryan, portrayed by Matt Damon, and bring him safely home. The main question which lingers throughout the movie is “when does one life become more important than another”, which in fact is not really answered.

Courage Under Fire is a war movie that promises to deliver excellent action scenes, with compelling screenplay and impressive performances by Denzel Washington, Meg Ryan and Matt Damon. Denzel Washington is a Lt. Colonel Nate Sterling who has to uncover the truth behind Meg Ryan’s character, the captain of a downed helicopter crew. The story has a lot of twists and turns and genuinely keeps you excited throughout.

This movie brought Keanu Reeves to limelight as he starred opposite Sandra Bullock in this energetic action movie. The movie is about a crazy bomber, Howard Payne, portrayed by Dennis Hopper, and how he plants a bomb in a bus. The plot soon brings our main characters together and their race against time in defusing the bomb and saving innocent lives.

Harry Tasker, portrayed by Arnold Schwarzenegger, leads a double life. Masking himself as a computer salesman, this spy/government agent has a license to do anything he wishes. Now he has to save the world from the evil plans of fanatic terrorists who have stolen nuclear weapons. Time is running out and Harry needs to find a way, at times being sidetracked by friends-turned-enemies, to get his hands on the atomic bomb and save the world.

Set in 1923, a group of archaeologists find their way to the tomb of High Priest Imhotep, who was punished for sleeping with Pharaoh Seti’s mistress and killing him. Imhotep was mummified alive and cursed, which after his resurrection would bring forth fatal consequences.

Evelyn Carnahan is an intelligent, clumsy Egyptologist, portrayed by Rachel Weisz and Rick O’Connell is an adventurer, portrayed by Brendan Fraser. The story gets really exciting after Evelyn accidentally resurrects Imhotep after reading the Book of Amun-Ra.

If you want raw action mixed with anti-social behavior and language, then Fight Club is what brings you that entertainment. Edward Norton and Brad Pitt demonstrate the reality of underground fight clubs, where men get a chance to be who they are and what is denied to them by society.

The second movie in the “Mexico Trilogy” brings Antonio Banderas seeking revenge on the drug lord who has killed his former lover. He has a guitar case filled with guns of all kinds, the plot of the movie takes you inside the gun-infested world of Mexico. This complete Western classic movie has all that guys love: guns, violence, vengeance, web of love and lots of action. Oh, did I mention there’s Salma Hayek in the movie as well? You can imagine how hot and heated this movie can be.

Leon is a hitman, portrayed by Jean Reno and Mathilda is a rebellious 12 year old, portrayed by Natalie Portman. The story follows these two characters when Mathilda’s father gets in trouble with a drug kingpin. Leon doesn’t like women or children in life, but circumstances bring them together when Mathilda asks for Leon’s help.

With computer graphics taking a huge leap into being amazingly unbelievable, these movies have made their way into our ‘must watch movies before you die’ list. The list of movies given below is prepared just for you.

Matt Damon stars as Jason Bourne, a psychogenic amnesiac who’s trying to find out his true identity. Similar to The Bourne Identity, The Bourne Supremacy and The Bourne Ultimatum are fast-paced and exciting action sequences. The movie, based on Robert Ludlum’s novel, brings forth the true understanding of paranoia as Jason Bourne tries to unmask his lost memory and identity.

If you have watched Gladiator, then you know why it needs to be included in the list. Russell Crowe is Roman General Maximus Decimus Meridius. Before the Emperor, Marcus Aurelius death, he chose Maximus to be his heir (even though he had a son).

Maximus and his family are condemned to death due to this power struggle. He can’t save his family and then is put in the Gladiator games till he dies. The only reason keeping him alive is the desire to rise to the top and be able to look in the eyes of Commodus (Emperor’s son) and have him feel his revenge.

Set in the year 1250 B.C., two emerging nations clash after Paris (the Trojan Prince), portrayed by Orlando Bloom, convinces Helen (Queen of Sparta), portrayed by Diane Kruger, to leave her husband Menelaus, portrayed by Brendan Gleeson. This decision of Helen’s soon sets off a fight between the two nations, a continuous battle till one of the last nations is defeated.

Pirates of the Caribbean is a fantasy, action, adventure and romantic movie. The movie follows many interesting characters: Elizabeth Swann, portrayed by Keira Knightley, Jack Sparrow portrayed by Johnny Depp, Will Turner portrayed by Orlando Bloom, and Barbossa portrayed by Geoffrey Rush.

Set in 480 B.C., the Greek city of Sparta has some of the finest warriors. The Persian King Xerxes, portrayed by Rodrigo Santoro, sends his army to conquer Greece. King Leonidas, portrayed by Gerard Butler, goes along with 300 of his finest soldiers on this suicide mission to stop this invasion. The struggle of the Spartan soldiers, along with King Leonidas, makes the audience experience the “heart in your throat” emotions throughout the movie.

I believe, and most of you will as well that The Dark Knight was not only the best Batman movie of all time, but also is this decade’s greatest action movie. The roles of Batman, portrayed by Christian Bale and the role of The Joker, portrayed by Heath Ledger were impressive and outstanding. Buy, beg, borrow or steal, but do make it a point to watch this movie (if you haven’t yet).

Angelina Jolie and Brad Pitt star in this action-packed movie, as both are leading secret lives. The movie follows a bored married couple, who are assassins by the way, working in two different competing agencies. The fun and excitement begins when they have to kill one another, after being married to one another for five years.

A futuristic, action movie set in the future depicts the clash of two cultures, humans and the inhabitants of another planet, Pandora. This is where Jake Sully (a paraplegic war veteran), portrayed by Sam Worthington, is brought and eventually is introduced to the humanoid race, Navi, of Pandora. The story shows the Na’vi inhabitants’ struggle (Jake helps them too) to save their culture and sacred world from the greedy humans.

Talk about action, adventure and fantasy all wrapped up in one. Bringing J. R. R. Tolkien’s three-volume book alive, keeping the storyline as original as possible, is no easy task. The fictional world of Middle-Earth and the journey of a young hobbit, Frodo Baggins, portrayed by Elijah Wood, and how he must destroy a powerful and evil ring, the One Ring of the Dark Lord Sauron.

Quentin Tarantino is a genius and he proves it with Kill Bill: Vols. I and II. The movie’s main character is called “The Bride”, portrayed by Uma Thurman, who was a member of the Deadly Viper Assassination Squad led by her lover Bill, portrayed by David Carradine.

She gets pregnant with Bill’s child, decides to leave the life of a killer, flees to Texas, meets a young man and on the day of her wedding, gets gunned down by her former squad and Bill. She survives, wakes from a coma, and finds out that she lost her baby. Realizing what happened, she seeks revenge on 5 people who destroyed her life. That’s where the whole Kill Bill saga begins.

Well, these were some movies that I’ve loved watching not just once, but countless times. But our list doesn’t end here. We’ve got an amazing lineup in 2012 and the list is just not stopping. Some of these movies are The Hunger Games, The Avengers, Snow White and the Huntsman, and 21 Jump Street (action/comedy) being released so far. And the movies which will be releasing later in the year are The Amazing Spider-Man, The Dark Knight Rises, The Bourne Legacy, The Expendables 2, Skyfall, and Django Unchained. So get ready to be wowed and enthralled this year.

These were your short, summarized details of 10 amazing movies that have been released in the 90s, 2000s, and the upcoming ones. Violence, explosions, car chases, bad guys vs good guys, and absolute need to blow people up is what these flicks are supposed to have. Don’t you agree?