Luna Lovegood. Say the name, and you picture a dreamy-eyed girl with dirty blond hair framing a pale, pale face. Things don't stop at her odd, yet arresting looks - the witty retorts and weird observations made Luna Lovegood a darling among numerous Pottermaniacs. Entertainism brings you a fantastic compilation of Luna's funniest, silliest, and most profound quotes. 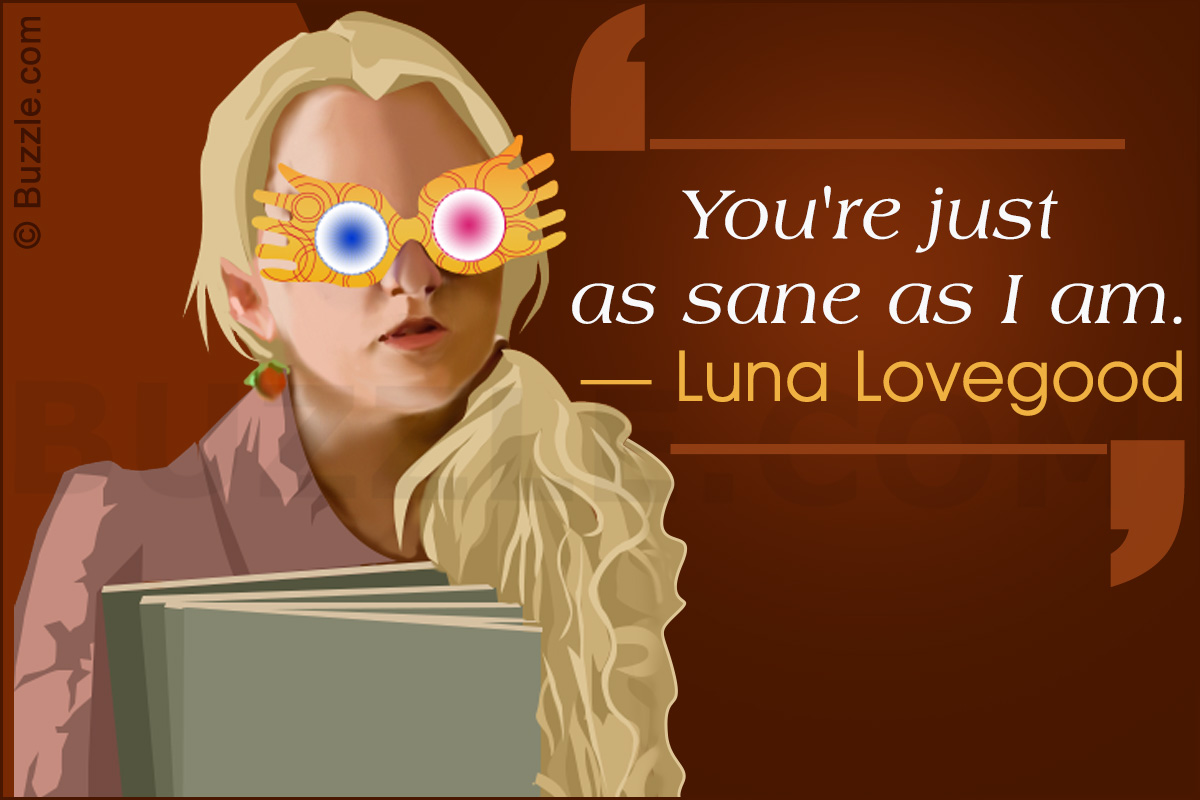 Luna Lovegood. Say the name, and you picture a dreamy-eyed girl with dirty blond hair framing a pale, pale face. Things don’t stop at her odd, yet arresting looks – the witty retorts and weird observations made Luna Lovegood a darling among numerous Pottermaniacs. Entertainism brings you a fantastic compilation of Luna’s funniest, silliest, and most profound quotes.

“I don’t know where she came from but I really like Luna―really fun to write. She’s slightly out of step in many ways but she’s the anti-Hermione. Hermione’s so logical and inflexible in so many ways and Luna is likely to believe ten impossible things before breakfast.”
―J.K. Rowling

The girl gave off an aura of distinct dottiness. Perhaps it was the fact that she had stuck her wand behind her left ear for safekeeping, or that she had chosen to wear a necklace of Butterbeer caps, or that she was reading a magazine upside down.

With an introduction like that, Rowling left us in little doubt that Luna Lovegood was going to be the most wackiest of the lot―a lot that already had Fred and George Weasley in it.

Luna Lovegood made her debut in the fifth book of the series, Harry Potter and the Order of the Phoenix. She’s the daughter of Xenophilius Lovegood, and belonged to the House of Ravenclaw at Hogwarts. She made an unusual pairing with Harry as being one of the very few people among his peers to have seen the thestrals―visible only to those who have witnessed death. As an active and enthusiastic member of Dumbledore’s Army, Luna demonstrated exemplary wizarding skills fighting off death eaters in the Ministry of Magic, as well as helping Harry locate the lost diadem of Rowena Ravenclaw in the final Battle of Hogwarts.

We’ve listed Luna’s quotes from each of the three novels she appeared in, followed by their movie versions. Read, laugh, and tear up a bit.

Harry Potter and the Order of the Phoenix

Quotes from the novel
“Wit beyond measure is man’s greatest treasure.”
“I don’t like dancing very much.”
“It’s all right,” said a dreamy voice from beside Harry as Ron vanished into the coach’s dark interior. “You’re not going mad or anything. I can see them too.”
“Can you?” said Harry desperately, turning to Luna. He could see the bat-winged horses reflected in her wide, silvery eyes.
“Oh yes,” said Luna, “I’ve been able to see them ever since my first day here. They’ve always pulled the carriages. Don’t worry. You’re just as sane as I am.”

“I believe He-Who-Must-Not-Be-Named is back, and I believe you fought him and escaped from him.”
“You can laugh! But people used to believe there were no such things as the Blibbering Humdinger or the Crumple-Horned Snorkack!”
“Well, that makes sense. After all, Cornelius Fudge has got his own private army.”
“What?” said Harry, completely thrown by this unexpected piece of information.
“Yes, he’s got an army of heliopaths,” said Luna solemnly.
“No, he hasn’t,” snapped Hermione.
“Yes, he has,” said Luna.
“What are heliopaths?” asked Neville, looking blank.
“They’re spirits of fire,” said Luna, her protuberant eyes widening so that she looked madder than ever. “Great tall flaming creatures that gallop across the ground burning everything in front of -“
“They don’t exist, Neville,” said Hermione tartly.
“Oh yes they do!” said Luna angrily.
“I’m sorry, but where’s the proof of that?” snapped Hermione.
“There are plenty of eyewitness accounts, just because you’re so narrow-minded you need to have everything shoved under your nose before you -“
“Well, my father is very supportive of any anti-Ministry action!”
“I’m supporting Gryffindor,” said Luna, pointing unnecessarily at her hat. “Look what it does. . . .”
She reached up and tapped the hat with her wand. It opened its mouth wide and gave an extremely realistic roar that made everyone in the vicinity jump.
“It’s good, isn’t it?” said Luna happily. “I wanted to have it chewing up a serpent to represent Slytherin, you know, but there wasn’t time. Anyway . . . good luck, Ronald!”
“Mistletoe,” said Luna dreamily, pointing at a large clump of white berries placed almost over Harry’s head. He jumped out from under it. “Good thinking,” said Luna very seriously. “It’s often infested with nargles.”
“You’re being rather rude, you know,”
“When you say ‘Sirius,’ are you talking about Stubby Boardman?”
“There are other ways of flying than with broomsticks,”
“I think they think I’m a bit odd, you know. Some people call me ‘Loony’ Lovegood, actually.”
“I still feel very sad about it sometimes. But I’ve still got Dad. And anyway, it’s not as though I’ll never see Mum again, is it?”
“Oh, come on. You heard them, just behind the veil, didn’t you? They were just lurking out of sight, that’s all. You heard them.”
“No, I think I’ll just go down and have some pudding and wait for it all to turn up. . . . It always does in the end.”

Quotes from the film

[To Harry Potter] “Is it true you can produce a patronus charm?”
“That’s all right. Anyway, my mum always said things we lose have a way of coming back to us in the end.
If not always in the way we expect.”
“We believe you, by the way. That He-Who-Must-Not-Be-Named is back, and you fought him, and the Ministry and the Prophet are conspiring against you and Dumbledore.”
“Well if I were You-Know-Who, I’d want you to feel cut off from everyone else. Because if it’s just you alone you’re not as much of a threat.”
“They’re called Thestrals. They’re quite gentle, really, but people avoid them, because they’re a bit…”
“You’re not going mad.”
“I see them too. You’re just as sane as I am.”
Harry Potter: So why can’t the others see them?
Luna Lovegood: The only people who can see them are those who’ve seen death.
Harry Potter: So, you’ve known someone who died?
Luna Lovegood: My mum. She was quite an extraordinary witch, but she did like to experiment, and one day, one of her spells went badly wrong. I was nine.

Harry Potter and the Half-Blood Prince

Quotes from the novel
“I enjoyed the meetings, too. It was like having friends.”
“I don’t think you should be an Auror, Harry,” said Luna unexpectedly. Everybody looked at her. “The Aurors are part of the Rotfang Conspiracy, I thought everyone knew that. They’re working to bring down the Ministry of Magic from within using a combination of Dark Magic and gum disease.”

“Oh, no, I’d love to go with you as friends! Nobody’s ever asked me to a party before, as a friend! Is that why you dyed your eyebrow, for the party? Should I do mine too?”
“A Wrackspurt… They’re invisible. They float in through your ears and make your brain go fuzzy, I thought I felt one zooming around in here.”
“I’ve never been to this part of the castle. At least not while awake. I sleep walk, you see. That’s why I wear shoes to bed.”

Quotes from the film

Harry Potter and the Deathly Hallows

Quotes from the novel
“Daddy, look – one of the gnomes actually bit me!”
“Ron can laugh,” said Luna serenely, “but my father has done a lot of research on Gernumbli magic.”

“You look smart. I told Daddy most people wear dress robes, but he believes you ought to wear sun colours to a wedding, for luck, you know.”
“There,” she said softly, “Now he could be sleeping.”
“I think we ought to say something,” piped up Luna. “I’ll go first, shall I?”
“Thank you so much, Dobby, for rescuing me from that cellar. It’s so unfair that you had to die, when you were so good and brave. I’ll always remember what you did for us. I hope you’re happy now.”
“I’ve never Stunned anyone except in our DA classes,”
“I’d want some peace and quiet, if it were me.”
“I’ll distract them all,” she said, “Use your cloak.”
“Oooh, look, a Blibbering Humdinger!”

Quotes from the film, Part 1

“Hello, Harry! Oh, I’ve interrupted a deep thought, haven’t I? I can see it growing smaller in your eyes.”
“Come, Daddy. Harry doesn’t wanna talk to us right now. He’s just too polite to say so.”

Quotes from the film, Part 2

“Harry Potter! You listen to me right now! Don’t you remember what Cho said about Rowena Ravenclaw’s diadem? There’s not a person alive whose seen it. It’s obvious isn’t it? You have to talk to someone who’s dead.”
[looking at wind chime made of shells] “Muggles think these keep away evil, but they’re wrong.”
« Previous Post
Next Post »