Who can ever forget our favorite spinach man?! Popeye was, without doubt, a memorable part of everyone's childhood. This Entertainism article compiles the most famous quotes from the comic as well as the 1980s' movie "Popeye". 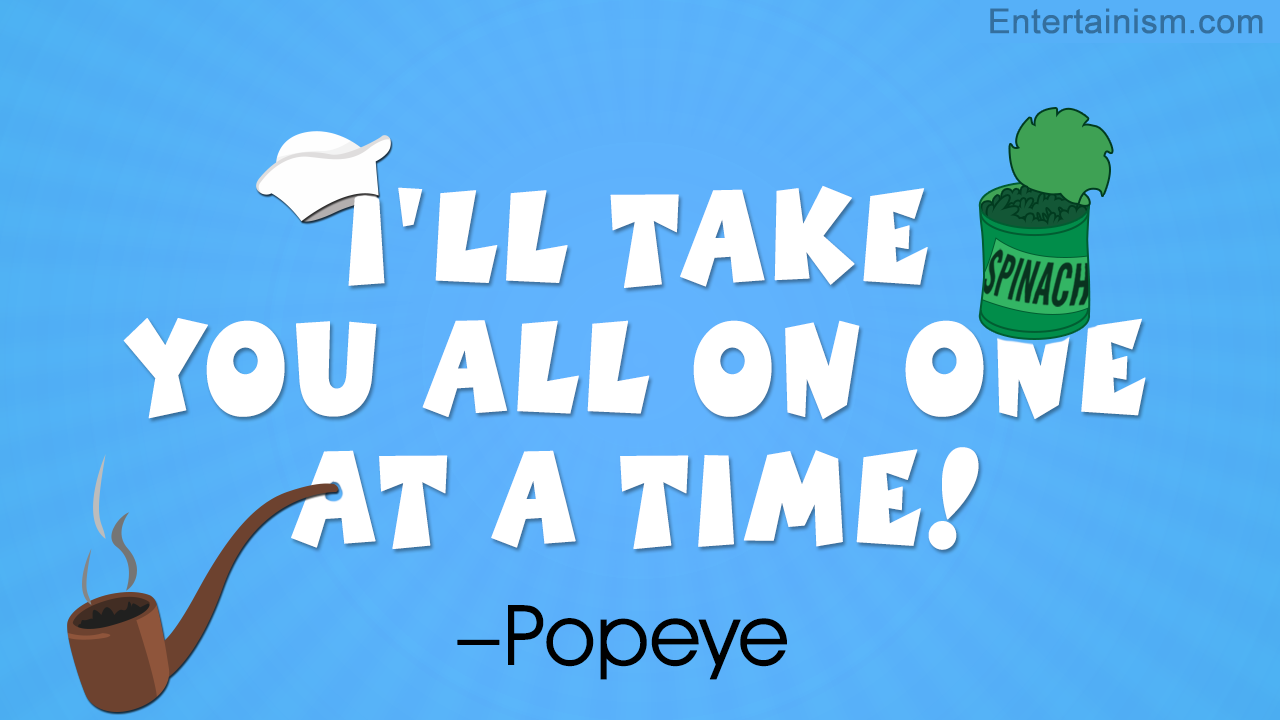 Who can ever forget our favorite spinach man?! Popeye was, without doubt, a memorable part of everyone’s childhood. This Entertainism article compiles the most famous quotes from the comic as well as the 1980s’ movie "Popeye".

» The sailor man with the spinach can!
» Blow me down! It’s comink for Chrustmas!
» Haves a happy holiday wit me an’ Olive!

Popeye is a famous fictional character from the comic strip Thimble Theatre. Although it originated as a comic strip, it has inspired various movies, as well as a television series. The plot revolves around the fight between Popeye, a sailor, and Bluto, his fellowship man, to win the love of Olive Oyl. Popeye is very popular for his pipe, his whistle (through which he makes the very famous “toot-toot” sound), and without a doubt, his spinach. Here are a few memorable quotes by the various characters from the comic, as well as the movie.

Famous Quotes from the Show/Comic

That’s all I can stands, I can’t stands no more. ― Popeye

I ain’t no tailor but I know what suits me. ― Popeye

I yam what I yam and that’s all what I yam. ― Popeye

Leave us not jump to seclusions. ― Popeye

I’m strong to the finich, ’cause I eats me Spinach, I’m Popeye the sailor man! (toot, toot). ― Popeye (from the theme song)

Well blow me down! ― Popeye

I will gladly pay you Tuesday for a hamburger today. ― J. Wellington Wimpy

Let’s you and him fight. ― J. Wellington Wimpy

Help, Popeye! Save me!― Olive Oyl

You keep your hands to you, that’s what you are!― Olive Oyl

Did you kill any Japs?― Dufus

I’ll take you all on one at a time!― Popeye

Where’s the entrance to the exit? ― Popeye

Famous Quotes from the Movie

Another thing I got is a sensk of humiligration. Now, maybe you swabs can pool your intelligensk and sees that I’m axsking you for an apologeky.

If I was gonna be Swee’Pea’s mother, I should’ve at least let Olive be his father. Or viska versa. I ain’t man enough to be no mother.

I know you ain’t down there. Truth is you ain’t here. Now, where ain’t you? Where ain’t me Swee’Pea?

Oh, what is this? A house of ill repukes? Ooh, who’d bring me infant to this den of immoraliky? Don’t touch nothin’. You might get a venerable disease.

Poppa. Pretty soon, you and me are going to be together again, huh? Yeah. Thirty years ain’t that long. Besides, next Wednesday’s our annual-versity. Yeah? Yeah. Stay alive. That’s all I’m axskin’ you. Good night, Poppa.

Hey, what’s this? One of Bluto’s tricks? I’m in the wrong movie.

Bluto, even though you’re larger than me, you can’t wins, ’cause you bad, and the good always wins over the bad.

Don’t thinks I blames ya, cause I don’t. Nope.

I hates sentiment. I am disgustipated.

It is an octopussy!

Eat your spinach, you no good infink. Eat it. Eat it! Eat it!

I’ve never seen like this before in me life, talking to your poor old father like that, you disobedient brat. You’re spoiled. That’s what you’re are, spoiled.

For the last time … Where’s Olive!

It is not ill-gotten, it’s good-gotten gains. These races will clothe us, and feed us, and save us.

I think family is more important than dumb morality.

Over the years, Popeye has inspired several movies and video games. He has also appeared on the radio and various TV shows. After all, we can never get enough of him, can we?