From a marvelous dancer and fashion model to a commendable actor and a devoted husband and father, Channing Tatum has truly come a long way. Entertainism brings you a list of Channing Tatum movies to feature this talented and handsome actor. 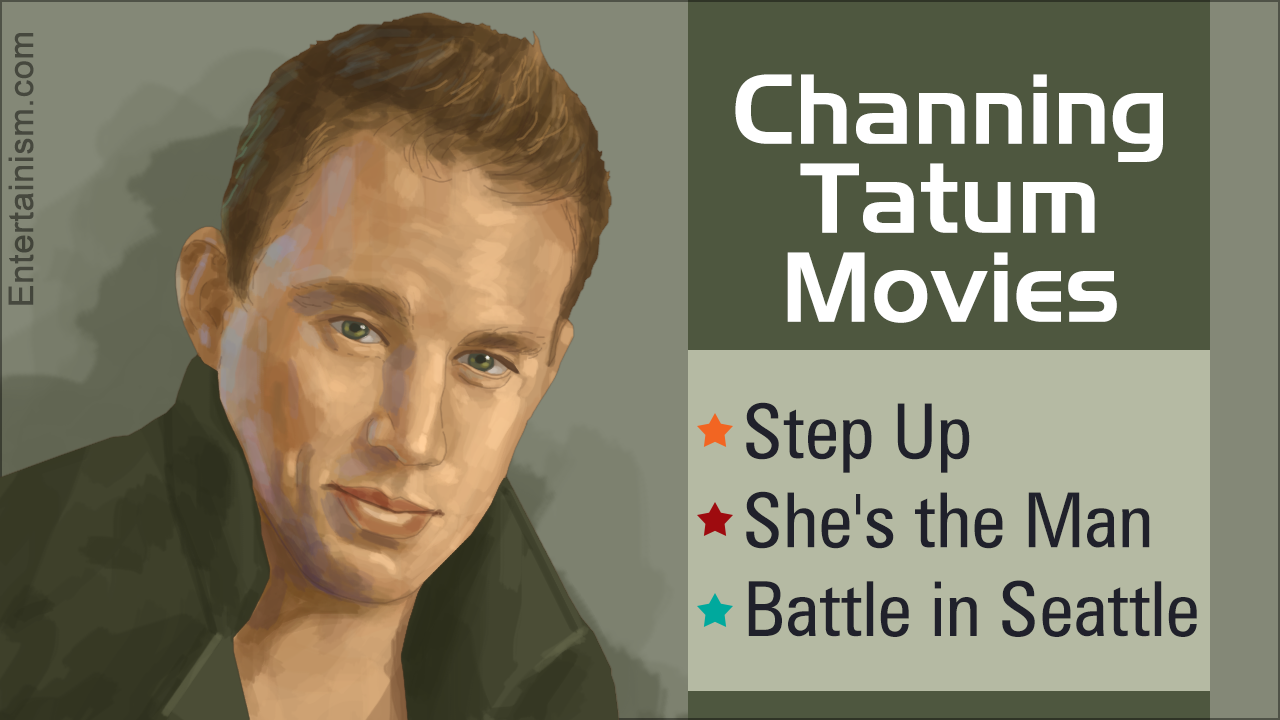 From a marvelous dancer and fashion model to a commendable actor and a devoted husband and father, Channing Tatum has truly come a long way. Entertainism brings you a list of Channing Tatum movies to feature this talented and handsome actor.

Channing Tatum is not  a professional dancer, and was quite intimidated to work alongside experienced dancers in Step Up.

Tatum’s first big break came in the year 2000 when he was cast as a dancer in Ricky Martin’s music video, She Bangs. His next move brought him to the world of fashion where he was working as a model for Giorgio Armani  and Abercrombie  & Fitch. And with enough exposure, no pun intended, he got to do commercials for Pepsi  and Mountain Dew.

But that’s not all; Tatum shone in the fashion industry with more and more campaigns coming his way from Nautica, Dolce  & Gabbana, American  Eagle  Outfitters, and Emporio Armani. In spite of so much success, he didn’t feel that a career in modeling was fulfilling enough. And hence, he made the transition to acting.

In a 2012 interview with Details  magazine, Tatum said, “I really don’t want to be in any more movies that I don’t produce. Unless it’s with one of the 10 directors that I really want to work with, I don’t have any interest in not being on the ground floor of creating it.” Along with his few friends and wife Jenna Dewan, Tatum has not one but two production companies under his name―33andOut Productions and Iron Horse Entertainment.

Even though he hasn’t studied acting, or has had any experience before, Tatum has climbed the ladder of success pretty quickly. With good luck and inherent talent, we surely are pleased with what he has been doing so far.

With every movie and professional endeavors, Tatum has proved that he can do more than just appear “pretty” on-screen. Here is a list of all the movies Tatum has been a part of through playing the main lead, being a producer, or having a cameo.

* Tatum had small role in Steven Spielberg’s War of the Worlds  as a boy in the church. However, the role was later deleted from the movie.

The movie is based on a true story about a basketball coach Ken Carter from Richmond High School, portrayed by Samuel L. Jackson. Even though being an undefeated team, in 1999, the coach made headlines for benching his entire team due to their poor performance in academics.

The movie is about two suburban teenage girls, Allison Lang (portrayed by Anne Hathaway) and Emily (portrayed by Bijou Phillips) who get exposed to the hip hop culture and are inspired to imitate a gangster lifestyle. Trouble soon arrives when they encounter a gang of drug dealers, and quickly realize they aren’t as street smart as they thought to be.

The movie is about two brothers, K.C. Carlyle (portrayed by Steve Howey) and Trip (portrayed by Mike Vogel) who have to help each other out in order to win the supercross championship in Las Vegas.

The movie is about how the two main characters Tyler Gage (portrayed by Channing Tatum) and Nora Clark (portrayed by Jenna-Dewan-Tatum) find themselves paired together for a showcase that will determine both their futures.

A Guide to Recognizing Your Saints (2006)

The movie is based on director/writer Dito Montiel’s 2001 memoir of the same name which describes his youth in Astoria, New York in the 80s. Robert Downey, Jr. and Shia LaBeouf both portray the lead character as the movie’s narrative jumps between 2006 and 1986 flashback.

It’s a short drama film where Maggie (portrayed by Jeanne Tripplehorn) is given a surprise birthday party from her friends.

The movie is based on the 1999 WTO Ministerial Conference protest activity where the activists successfully stop the meetings. It gives you an in-depth look at the movie’s several fictional characters during the 5-day protests in the streets of Seattle.

The movie is a sequel to the 2006 film Step Up  where two dance students from different backgrounds start liking one another. Channing Tatum has a cameo in the movie.

The movie is about Sgt. Brandon King (portrayed by Ryan Phillippe) who returns home from his tour of duty in Iraq. He is trying to adjust to the life back home, but suddenly, the Army orders him to go back to duty in Iraq against his wishes.

Sean MacArthur (portrayed by Channing Tatum) is a street hustler who sells counterfeit goods in New York City. He comes in contact with some boys who work for Harvey Boarden (portrayed by Terrence Howard). Harvey suggests that they fight for money, and the whoever wins the fight takes all the money.

The movie is an adaptation of Bryan Burrough’s non-fictional  book Public Enemies: America’s Greatest Crime Wave and the Birth of the FBI, 1933-34 which is set during the Great Depression. The Feds are trying to take down three notorious gangsters―John Dillinger (portrayed by Johnny Depp), Baby Face Nelson (portrayed by Stephen Graham), and Pretty Boy Floyd (portrayed by Channing Tatum).

The movie is adapted from Nicholas Sparks’ novel of the same name. It is a romantic drama where John, a Staff Sergeant (portrayed by Channing Tatum) and Savannah, a college student (portrayed by Amanda Seyfried) fall in a love and decide to write letters to each other once he is deployed.

The movie is about two best friends and partners―Ronny (portrayed by Vince Vaugh) and Nick (portrayed by Kevin James). Ronny finds out that Nick’s wife Geneva (portrayed by Winona Ryder) is having an affair with a guy named Zip (portrayed by Channing Tatum).

The movie is adapted from director/writer Dito Montiel’s book of the same name. It shows how a young cop Jonathan White (portrayed by Channing Tatum) who is assigned to a precinct where he grew up has an old secret that could possibly destroy his life and his family.

The movie is adapted from Rosemary Sutcliff’s novel The Eagle of the Ninth  which tells the story of a young Roman soldier, Marcus Flavius Aquila (portrayed by Channing Tatum) who searching for his father’s golden emblem so that he can honor his memory.

A group of friends meet the night before their 10-year high school reunion. Even though it’s 10 years after they graduated, they find out that they haven’t actually grown up in some ways.

The movie is based on a black ops soldier, Mallory Kane (portrayed by mixed martial arts fighter, Carano) who is seeking payback for being betrayed and set up during a mission.

The movie is based on the true story of Kim and Krickitt Carpenter. Paige (portrayed by Rachel McAdams) gets into an accident and goes into a coma. Upon waking up, she loses her memory and forgets that she is married to Leo (portrayed by Channing Tatum).

The movie is based on the 1987 TV series of the same name where two underachieving police officers―Schmidt (portrayed by Jonah Hill) and Jenko (portrayed by Channing Tatum)―are sent back to high school. Their aim is to blend in, find out who is supplying drugs to the students, and bring a stop to it.

The movie shows how Magic Mike (portrayed by Channing Tatum) teaches Adam (portrayed by Alex Pettyfer) how to pick up women and make easy money through stripping.

The story follows the life of Emily (portrayed by Rooney Mara) who starts to take prescribed antidepressant drugs after her husband Martin (portrayed by Channing Tatum) is released from prison. Even though the medication is working, it has an unexpected side effect that she now has to deal with.

It is a sequel to the 2009 G.I. Joe: The Rise of the Cobra. Duke (portrayed by Channing Tatum) is now the leader of the G.I. Joe unit. However, the unit is framed for stealing nuclear warheads from Zartan (portrayed by Arnold Vosloo). It is up to the Joes to find a way to clear their name and fight their mortal enemy Cobra.

The ensemble cast of the movie play fictional/exaggerated versions of themselves when they are attending a party at James Franco’s house.

The movie follows the life of a writer Jon (portrayed by Joseph Gordon-Levitt) who has dedicated towards his family, friends, and the church.

The movie is based on the Lego construction toys where all the cast of the movie has provided the voices for each character.

The movie is a sequel to the 2012 21 Jump Street  movie based on the 1987 TV series of the same name. Schmidt (portrayed by Jonah Hill) and Jenko (portrayed by Channing Tatum) are sent a college this time on an undercover mission.

As of June 2014, Tatum has three more movies lined up for release in the next coming years.

The movie is based on the Olympic wrestling gold medalist Mark Schultz’s biography.

The Book of Life

The movie is based on Manolo (portrayed by Diego Luna) who has to decide whether he should fulfill his family’s expectations from him or follow his heart.

The movie follows the life of Jupiter Jones (portrayed by Mila Kunis), a down on her luck janitor who finds out about her great genetic destiny that goes far beyond the reaches of Earth.

It was revealed in December 2013 that X-Men: Apocalypse  will be the upcoming movie in the X-Men series. According to Bryan Singer, this is going to be “more of a First Class  sequel and will take place in the 1980s.” Channing Tatum will be playing the role of Remy LeBeau/Gambit, a mutant who is capable of controlling, creating, and manipulating kinetic energy as and when he desires. Apart from this, he is very intelligent and is skilled in throwing cards, hand-to-hand combat, and using a bō (long staff).

Though the journey has been a short one, Tatum surely has come a long way. Being more than your run-of-the-mill rom-com dreamboat, there is a lot we haven’t seen from him yet; only time will tell what this star might bring to the big screen.