Simply Shocking! The Most Expensive Celebrity Divorces Ever

As fans speculate about another high-profile divorce settlement amount that Katie Holmes will receive from Tom Cruise's $300 million fortune, this post enlists some of the really expensive celebrity divorces that gathered global headlines.

Home / Actors / Simply Shocking! The Most Expensive Celebrity Divorces Ever 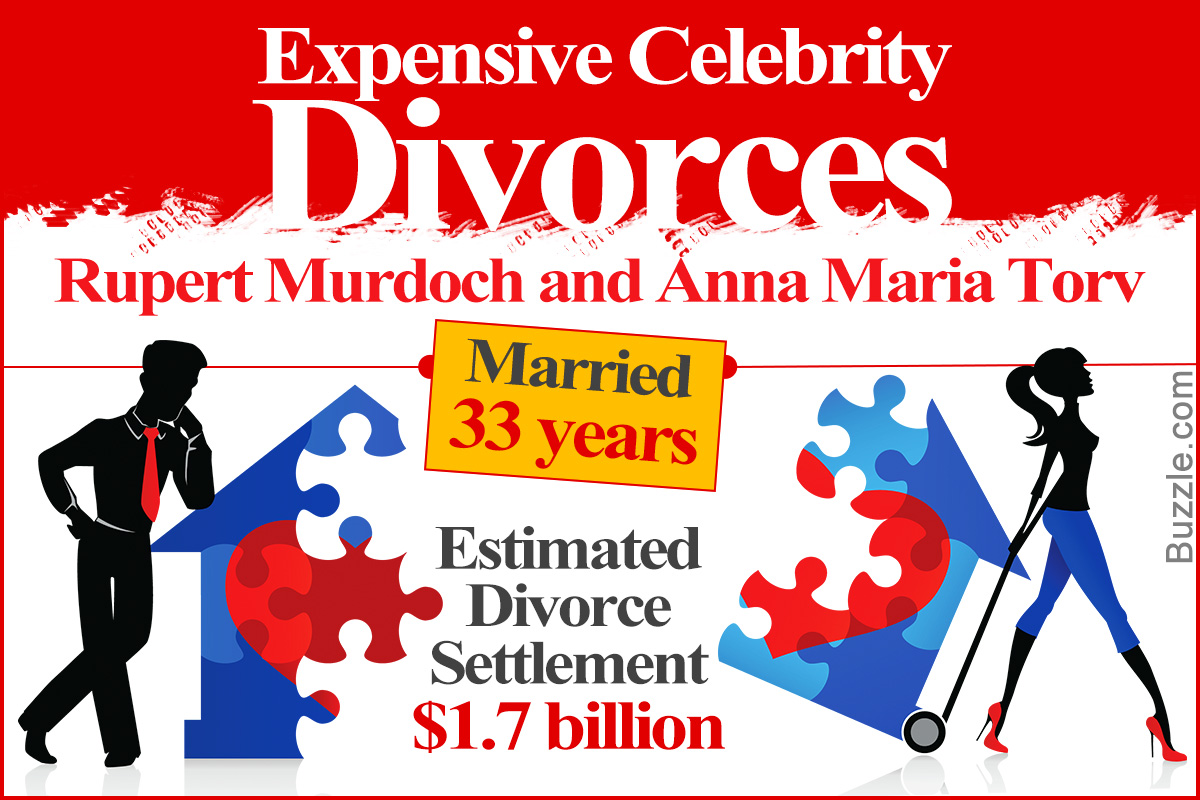 As fans speculate about another high-profile divorce settlement amount that Katie Holmes will receive from Tom Cruise’s $300 million fortune, this post enlists some of the really expensive celebrity divorces that gathered global headlines.

When a celebrity couple heads for splitsville, their journey definitely becomes a sort of enigma for people around the world. It is a known fact that marriages in Hollywood don’t last. Kim Kardashian’s wedding to basketball player Kris Humphries lasted 72 days. Pop princess Britney Spears was married to her childhood friend Jason Alexander for a mere 55 hours. Kid Rock and Pamela Anderson were married for 4 months. NBA star Dennis Rodman was married to Baywatch beauty Carmen Electra for 9 days, and Eddie Murphy and Tracey Edmonds were man and wife for just 2 weeks.

The course of love in these marriages didn’t run that smooth, but it definitely ran through their bank accounts. When a celebrity’s marriage breaks down, millions of dollars exchange hands in the blink of an eye, and I’m not talking just cash. The bill includes houses, properties, alimony and child support (if the pair have kids). So without further ado, let’s check out which celebrities had to shell out billions or millions of dollars during their separation.

All the figures mentioned are in USD.

Mr. Murdoch is a big name in the entertainment industry. The founder, chairman, and CEO of News Corporation, the world’s second-largest media company, made headlines when he divorced his second wife Anna Maria Torv for the much younger Wendi Deng (his current wife). As part of the divorce settlement, Mr. Murdoch gave Torv almost $1.7 billion from his $8 billion fortune.

The title of the second-most expensive divorce settlement in the world is held by Formula One supremo Bernie Ecclestone and his second wife, a former model, Slavica Ecclestone. The F1 tycoon had to shell out almost $1.2 billion for his ‘unreasonable behavior’. The reasons and figures of the separation were never made public, but it is believed that the couple remains on cordial terms for the sake of their two daughters.

Mel Gibson married Robyn Denise Moore in 1980 and their happy union produced seven children. However, their great marriage ended in 2006 and they were officially divorced in 2009. After that, Mel moved on with Russian pianist Oksana Grigorieva and had a daughter. Robyn was granted a settlement of over $400 million.

Arnold Schwarzenegger is a man of many talents. After having a good run in the fitness world, he turned his attention to Hollywood and gradually became one of the most successful actors of the ’80s and ’90s. During that period, he married Maria Shriver, and the couple had four children. In 2003, he shifted his attention to politics and was elected the governor of California, twice. However, he again graced the front page of the tabloids when he admitted fathering a child with a member of the domestic staff of his house. Since Arnold and Maria didn’t sign a prenup, he was required to give half of his wealth to Shriver under California law. The actual figures were never revealed, and it is estimated that his total wealth was between $500 to $750 million, which entitled Shriver to almost $250 to $375 million.

Although he has no connections to Hollywood, Roman Abramovich is a celebrity in his own right. Other than the fact that he owns the world’s second largest private yacht, a Boeing 767, and has luxurious mansions all around the West, Abramovich is particularly identified as the supremo of Chelsea F.C., and his total worth measures $14.6 billion. His separation from his second wife, Irina Vyacheslavovna Malandina in 2007 caused headlines, as it was reported that she was seeking almost $7 billion in settlement. However, both the parties dismissed these reports and the actual settlement was $300 million.

The legendary Michael Jordan is probably the most popular symbol for basketball globally. The man is a team player, trustworthy, respectful, and prefers keeping his personal life away from the spotlight. However, he couldn’t keep the tabloids away when his marriage of 17 years to Juanita collapsed. They first separated in 2002, reconciled shortly afterwards, but were finally divorced in 2006, and Mrs. Jordan received a settlement of almost $168 million.

One of the most successful American lyricist-singers of all time, Neil Diamond has sold over 125 millions records globally, including 50 million in the US. He married Marcia Murphey, a production assistant in 1969 and had two sons. The marriage lasted more than two decades, and ended in 1995. Media speculated Neil’s constant touring and affairs as the prime reason for the divorce. While neither party has responded to these rumors, Mr. Diamond was happy to pay almost half his earnings ($150 million) to his beloved, and even wished her all the best for the future.

Garth Brooks is one of the most celebrated and successful country music singers in the world. After being married to his college sweetheart Sandy Mahl for 14 years, their marriage came to an abrupt halt. Some speculated Garth’s constant touring and recording the prime reason for the separation, while some blamed an affair with longtime friend and collaborator Trisha Yearwood. While the two initially denied the rumors, they did get married after the divorce was finalized, and Sandy Mahl was awarded $125 million as a divorce settlement.

One of the best golfers to ever step on the course, Greg Norman generated global press when he and Laura Andrassy, his wife of 25 years decided to end their marriage. Although Norman refused to share the details, the media speculated an affair with tennis star Chris Evert as the main reason for the divorce. The divorce awarded Laura a settlement of $103 million, and Greg Norman moved on and married Evert only to divorce her after 15 months.

Steven Spielberg is not just a brilliant director, he is often idolized as a filmmaking institute in himself. Apart from direction, he is also the co-founder of DreamWorks Studios, and almost all his films bring impressive box office results. When his marriage of 4 years to actress Amy Irving hit rock bottom, she was awarded a bounty of $100 million. Spielberg didn’t want to pay that much, but he avoided any legal battles as he wanted to stay on good terms with his ex-wife for their son’s sake.

The world’s #1 golfer and highest-paid athlete married the former Swedish model in a lavish ceremony, which alone cost them $2 million. However, this fairytale union came to an abrupt halt in the wake of Tiger’s scandalous affairs that had been exposed following an automobile accident in 2009. Woods apologized, took a break from golf, and his wife received a cool $100 million from his billion-dollar fortune.

Madonna is probably the most famous female celebrity of our time, and had to pay Guy Ritchie a generous amount from her enormous £500 million fortune, when they got divorced. The Material Girl married the Snatch director in 2000 and the couple parted ways after eight years of marriage which produced one son. He walked out with almost $92 million in settlement, but the couple still remain on good terms with Ritchie helping Madonna with her first movie as a director, W.E.

In addition to the above high-profile divorces, here are some more names which managed to grab headlines because of the money involved in their separation.

For now, the settlement paid by Rupert Murdoch to Anna Torv remains the most expensive divorce settlement in history. Any guesses which celebrity couple would join this list soon?