There are many beautiful romantic movies that strike a chord deep in the heart. There are innumerable movies in this genre, which won many accolades, that listing only a few seems to be unfair. However, due to time and space constraint, the list is limited.. 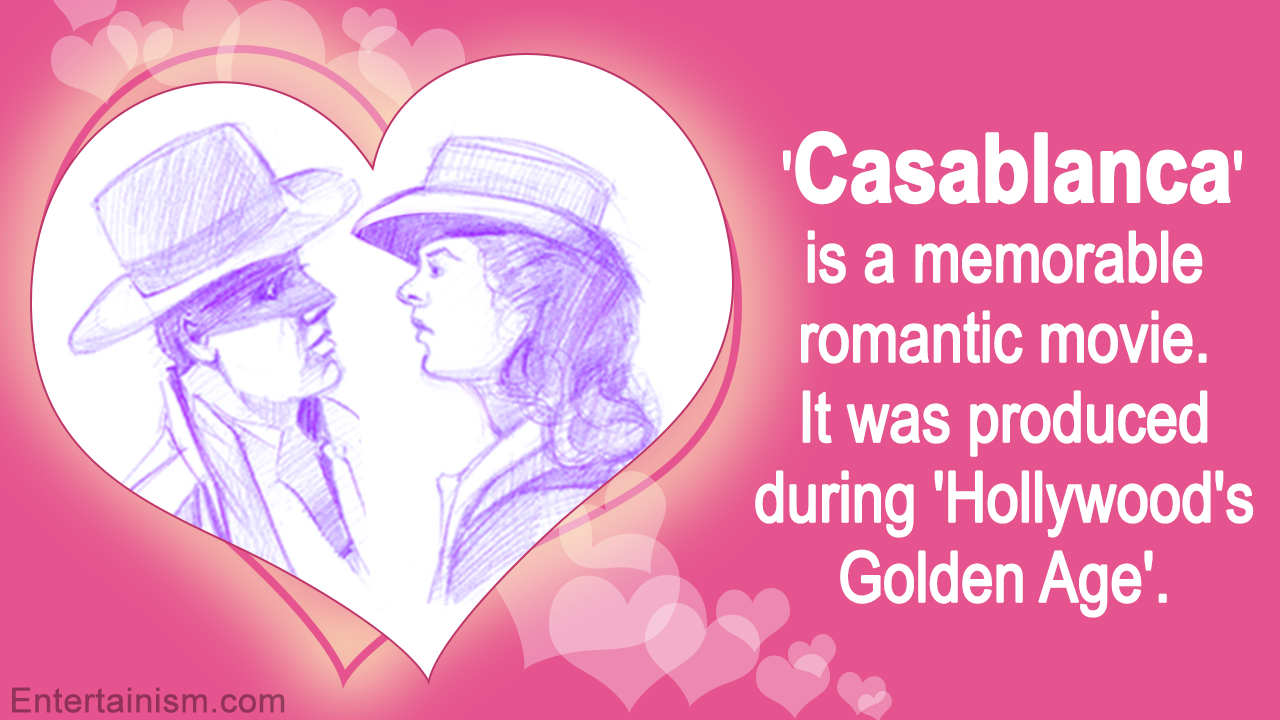 There are many beautiful romantic movies that strike a chord deep in the heart. There are innumerable movies in this genre, which won many accolades, that listing only a few seems to be unfair. However, due to time and space constraint, the list is limited..

The best love is the kind that awakens the soul and makes us reach for more; that plants a fire in our hearts and brings peace to our minds…That’s what you’ve given me and that’s what I hope to give to you forever. ~ The Notebook

Romantic movies are purely based on emotion and watching them gives you a roller coaster ride of feelings, from sadness to joy. Hollywood has produced many good movies that have been huge blockbusters and also have a huge fan following. There are so many movies with touching plots and soothing music that it is quite impossible to list all of them.

Romantic movies is one such popular genre that is loved by everyone. The amazing storyline of these movies brings forth emotions deep from the heart. These movies carry the pure essence of love and sacrifice. Here are some such wonderful movies that have stirred deep rooted emotions in its audience.

Gone With The Wind (1939)
The plot of this movie was adapted from the novel by Margaret Mitchell. Scarlett O’Hara, the daughter of a wealthy plantation owner Gerald O’Hara falls in love with another plantation owner Ashley Wilkes, unknown of the fact that Ashley is in love with his cousin Melanie Hamilton. In a party thrown at Seven Oaks, the Wilkes plantation, Scarlett catches a glimpse of Rhett Butler who tries to flirt with her but she shows no interest. Meanwhile, Scarlett discovers that Ashley had planned to marry Melanie. So on an impulse she marries Melanie’s brother Charles, who goes off to fight in the Civil War but dies due to measles and pneumonia. Now widowed, Scarlett is again pursued by Rhett Butler. She denies his advances and still clings to the belief that she loves Ashley. Vivien Leigh, Leslie Howard and Clark Gable are the main actors in this movie. Truly a recommended movie to watch and enjoy.

Casablanca (1942)
Casablanca, which was directed by Michael Curtiz and had Humphrey Bogart, Ingrid Bergman and Paul Henreid in the lead role is one of the most memorable films to be produced during Hollywood’s Golden Age. This movie has the basic ingredients of action, romance, melodrama etc. balanced appropriately. It has a love triangle, where two men fall in love with the same woman. The plot of this movie is set during the Second World War. It is based on the letters of transit obtained illegally from a nightclub in Casablanca and used as passport by the refugees to escape the war. One day Rick, the owner of the nightclub is surprised by the visit of a famous rebel Victor Laszlo with his wife, who wants him to escape to America. He is finally convinced to escape and Ilsa reunites with her former lover Rick. Hearing this Victor is enraged but in the end forgives both of them. Surely a movie that has captured the hearts of critics as well as the audience.

Love Story (1970)
Adapted from the novel of the same name written by Eric Segal, Love Story is one of the best romantic movies of all time and my personal favorite. The story revolves around two young lovers, Oliver and Jennifer, who get married to each other despite the objection from the boy’s father, who is a prominent businessman. Without any financial support, the couple struggles to pay for Oliver’s education through the law school. Once Oliver graduates from the school, he takes up a job as a lawyer in a respectable law firm in New York. In the meanwhile, Jenny contracts leukemia, which is revealed through a medical test. However, Jenny is ignorant of the fact that she is suffering from a deadly disease. Oliver, to foot the hospital expenses, asks his father’s financial help without informing him the real reason. Jenny in her last days, tells Oliver to stop blaming himself and finally dies in his arms. The beautiful storyline, the soul wrenching background score and the tragic ending make this, one of the emotional movies that make you cry. Starring Ryan O’Neal, Ali MacGraw and Ray Milland.

When Harry Met Sally (1989)
Acclaimed as one of the best romantic comedies of all time, When Harry Met Sally, is a story of two people who meet on a trip to the same place. During the journey, both have discussions regarding their respective lives and their characters. On arrival they part ways and after a few years they meet on an airplane and Harry reveals that he was married once but is now divorced. A series of chance encounters follow after this meeting. They become friends and eventually fall in love with each other. In the end they finally get married and prove that ‘it is impossible for men and women to be just friends‘. The characters are played beautifully by Billy Crystal and Meg Ryan and this film won critical acclaim.

Pretty Woman (1990)
One of the top romantic comedies, Pretty Woman is Hollywood’s version of a modern-day fairytale about a corporate and a free spirited woman. Edward Lewis (Richard Gere), who has recently broken up from hos girlfriend meets Vivian Ward (Julia Roberts) on his way to the Beverly Hills Hotel. Vivian is hired by Edward to be his escort during several functions, both business and social. During the weeklong stay, they both fall in love with each other. The movie is charming with bits of comic performances and hilarious one liners. Though originally this film was based on prostitution in New York, it was rewritten to be a romantic comedy, which ended up becoming a huge hit during the 1990s.

Titanic (1997)
One of the most romantic and tragic movies, Titanic, directed by James Cameron, is inspired from the real ship RMS Titanic, which sank on its maiden voyage from Southampton, England to New York, United States Though the love story of Jack and Rose is fictional, this movie does not fail to strike a chord deep in the heart. Jack (Leonardo Dicaprio), who is a tramp, falls in love with Rose (Kate Winslet), a rich girl from a socialite family, though she is already engaged. Fed up with her highly glamorous life and longing to be an ordinary girl, Rose has a chance encounter with Jack and falls in love with him. On that fateful night, when the Titanic sinks Rose, aboard a plank, realizes that she loves Jack but is too late as he is already dead. Rose lives in his memories till the end. This heart-touching movie which won 11 Oscars is also one of the saddest movies of all time that leaves one teary eyed. Undoubtedly one of the best movies in this genre.

Moulin Rouge (2001)
Regarded as one of the top ten movies of all time, Moulin Rouge is a romantic musical. The movie stars some of the best actors of the industry – Ewan McGregor, Nicole Kidman and Jim Broadbent. The story revolves around Christian, who is a poet and who falls in love with a terminally ill cabaret star. The young Bohemian poet, who defies his father moves to Paris where he meets Satine in Moulin Rouge and falls in love with her. He decides to make her his star of the play he is writing. This tragically doomed romance based on the opera Orpheus in the Underworld, won many awards.

Love Actually (2003)
Another romantic comedy, Love Actually is an ensemble of ten separate stories delving into different expressions of love from the viewpoint of different individuals. The film has a star cast of acting talents like Hugh Grant, Emma Thompson, Keira Knightley and Alan Rickman etc. There are ten different but intertwining love stories of different people: the bachelor Prime Minister of United Kingdom, a sandwich delivery guy, a Portuguese housemaid, a headmistress and many others, that all end up conveying the same message – love is the driving force in all these people’s lives. The story is set in London and is based on how these people find their true love. This is one of the good romantic movies and was brilliantly directed by Richard Curtis.

The Twilight Saga: New Moon (2009)
One of the best romantic movies of 2009, The Twilight Saga: New Moon is inspired from the second book of the Twilight series by Stephanie Meyer. This is one of the classic examples of books made into movies, which portrays a beautiful love story between a vampire and a human being. Bella Swan (Kristen Stewart) loves Edward Cullen (Robert Pattinson) who is a vampire. On her 18th birthday, Bella is invited by Edward’s family for a party. She accidentally cuts herself while unwrapping a gift, which makes her a possible victim to his family, who are vampires. To save her, Edward breaks off with her. Shattered, Bella finds comfort in her old friend who tries to make her forget her sorrow. Bella delves into the mystery of the other world in her yearning to be reunited with Edward. But she finds herself dragged into a greater peril than the one she has encountered before. The climax is really gripping. Definitely one of the must watch movies of all time.

Valentine’s Day (2010)
The recent romantic movie, Valentine’s Day has a huge star cast with the likes of Julia Roberts, Ashton Kutcher, Bradley Cooper, Jennifer Garner, George Lopez, Jessica Alba, Jamie Foxx, Anne Hathaway to name a few, along with many other popular actors. This movie had the largest cast in the history of Hollywood. The plot of this romantic movie of 2010 is about the story of ten different people in Los Angeles, whose lives intertwine on a romantic holiday on Valentine’s day. This love story is just a reflection of the ups and downs of relationships in real life. This is one of the amazing romantic comedy movies which was a massive hit at the box office.

These were some of the greatest romantic movies, ever made. However, this list is exhaustive as there are many movies still in the grapevine. Get a personal copy of these movies and enjoy them with your family or friends in the comfort of your house.