Top 10 Best Hollywood Movies You Cannot Miss for the World

Movies are an intrinsic part of our lives. They make us laugh, cry, shout in anger, cheer in glee, and help us vicariously live situations we know we never will otherwise. In this article, we give you ten movies that stand out in the many movies that Hollywood has produced over the years. 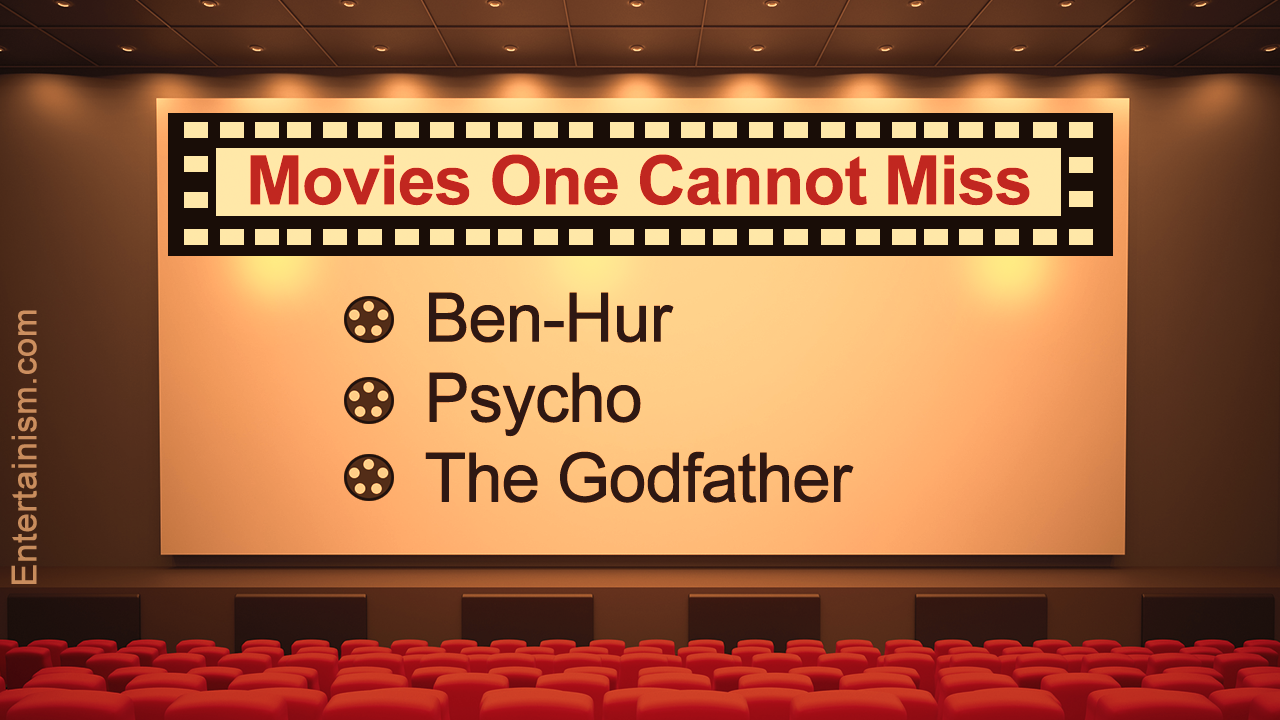 Movies are an intrinsic part of our lives. They make us laugh, cry, shout in anger, cheer in glee, and help us vicariously live situations we know we never will otherwise. In this article, we give you ten movies that stand out in the many movies that Hollywood has produced over the years.

I have been a movie buff ever since I can remember. My parents both had a great passion for movies with my father being a keen viewer of ‘English movies’, as we called Hollywood movies that made their way to our Indian movie theater screens and my mother being an avid fan of Hindi movies. So, a large chunk of my formative years were spent in darkened cinema halls as I experienced the thrill that came with watching war movies, the chills that horror movies inevitably brought about, the rib-tickling laughter that comedies caused, and the enthrallment brought about by dramas and historical epics. Over the years I have seen Hollywood movies ranging across a wide spectrum, from movies of the black and white era to the movies of today with their computer generated special effects. It is therefore really hard to make a list of the top 10 best Hollywood movies that everyone would agree on. Each movie that has been heralded by critics and viewers alike is unique in its own way.

Selecting the top 10 Hollywood movies is a subjective exercise at best. However, great movies usually have a few common factors about them. First of all, as far as I am concerned, I enjoy movies that have great performances, a storyline that grips my imagination, and that indefinable something about them that just reaches out and touches your inner core – a universal human experience, is the best way that I can describe it. Secondly, great movies have an ageless, timeless quality about them, and can be seen over and over, without ever getting old. And that is certainly the case with the movies I have listed below (and many more besides) – I can watch them again and again. And thirdly, great movies are not merely entertaining, they somehow manage etch themselves in your memory. With these criteria in mind, I have chosen my top ten Hollywood movies. This list is in no specific order, except year of release.

This Oscar winning romantic movie set against the backdrop of World War II starring some of the biggest stars of the time has become an all-time classic. Redolent with smoke filled, emotionally charged scenes, it is about the conflict faced by Rick of choosing between doing the right thing and helping the husband of his former lover, Ilsa, and his love for her. Today, Casablanca is ranked amongst the all time best Hollywood movies ever made.

This wonderful comic musical is a hilarious take on the transition of Hollywood movies from the silent film era to the talkies. The title track of the movie is exceedingly memorable for not only the catchy lyrics but the beautiful choreography as well. The performance by Gene Kelly in the song is today considered iconic and is one of the most imitated scenes ever.

“Peace! Love and peace. Do you think I don’t long for them as you do? Where do you see them?”

Winning as many as eleven Academy Awards, this epic film was the third film to be made based on the novel, Ben-Hur: A Tale of Christ by Lew Wallace. It was an extremely expensive production and the results were there for everyone to see. Who can forget that galley scene, and of course that simply stupendous chariot race scene? Even by today’s hi-tech, computer-generated special effects standards, that chariot race scene in Ben-Hur is regarded as one of the most sensational action sequences ever to be captured on film.

“A boy’s best friend is his mother.”

This genre defining horror-cum-suspense movie has won acclaims as one of the most effective in its class. Practically all the scenes have become legends cinematically, and have gone on to spawn several remakes and sequels, none of which have managed to come anywhere close to the original. The movie is about the encounter between Marion Crane, played by Janet Leigh, a secretary who goes to hide at a motel after stealing from her employer, and the lonely owner of the motel, Norman Bates, played brilliantly by Anthony Perkins. Can one talk about Psycho and not mention the shower scene? It still sends shivers down my spine! It has been studied closely and has raised endless debates about why it inspires such terror and how it was shot.

“You see, in this world there’s two kinds of people, my friend: Those with loaded guns and those who dig. You dig.”

Oh, how can I ever forget the languid, gun-on-hip-toting saunter of Clint Eastwood, his blue eyes crinkled against the sun, the comic excellence as displayed by Eli Wallach, and the villainous depiction by Lee Van Cleef. And then there is the famous musical score of the film which was composed by Ennio Morricone. This movie was a part of the Dollars Trilogy directed by Sergio Leone. The movie’s spectacular widescreen cinematography was the result of the work by Tonino Delli Colli. The plot revolves around three gunslingers who are competing with each other to locate the hidden Confederate gold, which involves gunfights, Civil War battles, hangings, violent chaos, and prison camps – all classic themes of a great Western.

Based partly on the short stories written by Arthur C. Clarke, particularly ‘The Sentinel’, this science fiction movie deals with fascinating themes like extraterrestrial life, artificial intelligence, technology, and human evolution. The special effects used in it were pioneering, and it was marked by its scientific realism, and the intriguingly equivocal sound effects and imagery used instead of the traditional techniques of narrative. Although the movie got mixed reviews when it was released, critics today proclaim it as one of the greatest movies ever made.

“I’m going to make him an offer he can’t refuse.”

This classic movie based on the Mario Puzo novel of the same name is another of my all-time favorites. The director Francis Ford Coppola wrote the screenplay in collaboration with Puzo and created a masterpiece that can boast of some of the best performances of all time. This crime film spanning ten years, from 1945-1955, chronicles the Corleone family. No other movie made about the mafia since this movie, comes anywhere close to The Godfather, in my opinion. I found the two sequels, The Godfather Part II (1974) as well as The Godfather III (1990), equally engrossing.

“Which one of you nuts has got any guts?”

The viewer is taken into the environs of a mental hospital in this movie. It delves into the life of a man called Randall McMurphy, a convict who chooses to spend time in the hospital, rather than serve time in prison. He achieves this by feigning to be slightly crazy. The time he spends in the mental ward, the interactions he has with the other patients there, his conflicts with the insensitive and cold nurse, named Nurse Ratched, are what make this one of the best Hollywood movies. The movie went on to sweep all the major Oscar awards of that year including Best Actress, Best Actor, Best Screenplay, Best Director, and Best Picture.

“I love the smell of napalm in the morning.”

This brilliant movie takes you as much into the dark jungles of Vietnam where Benjamin L. Willard, an army captain, is sent to eliminate Walter E. Kurtz, a Colonel of the United States Army Special Forces, who is thought to have gone insane, as it takes you into the dark depths of the human psyche. Directed by Francis Ford Coppola, and based largely on the novel, Heart of Darkness, by Joseph Conrad, it has the brooding presence of an aging and corpulent Marlon Brando at his best, Robert Duvall in the Oscar-nominated role of Lt. Colonel Bill Kilgore, Dennis Hopper in the role of a photojournalist, and of course, Martin Sheen in the role of Captain Benjamin, which was based on Conrad’s character, Marlow. Apocalypse Now is the winner of the Academy Award of 1979, the Cannes Palme d’Or, and the Golden Globe.

“There are fewer than 4000 Jews left alive in Poland today. There are more than 6000 descendants of the Schindler Jews.”

Although Oskar Schindler was an unlikely figure to be an historic hero, he became exactly that, and his story has been told brilliantly in this evocative film about the holocaust. Schindler, the businessman, whose primary motive was to make money, spends all his fortune on saving one thousand Jews from the gas chambers of the Nazis. This movie was critically acclaimed and many consider it to be a masterpiece and one of the best movies in the director, Steven Spielberg’s illustrious film-making career.

This was a subjective list of the movies that I think make up the ten best movies that Hollywood has produced till date. These movies manage to not only entertain us but leave us spellbound in a way that not every movie can. The stories remain with the viewers long after they have watched the movie. It is perhaps that quality that makes them such indelible memories.