Was Mulan Based on a Real Story?

After the huge success of the Disney movie based on Mulan, a Chinese warrior, there have been questions on the real story of Mulan, her history, origins, etc. This Entertainism article tries to answer these questions on this infamous Chinese heroine.

Home / Movies / Was Mulan Based on a Real Story? 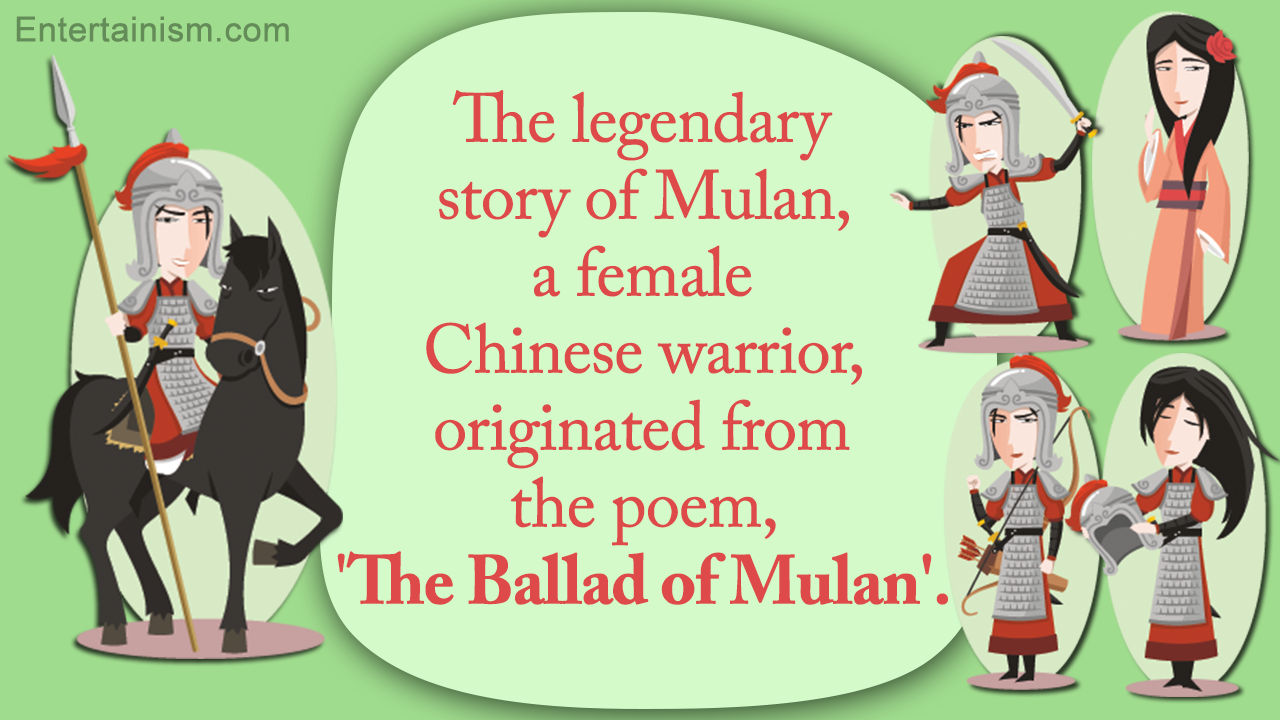 After the huge success of the Disney movie based on Mulan, a Chinese warrior, there have been questions on the real story of Mulan, her history, origins, etc. This Entertainism article tries to answer these questions on this infamous Chinese heroine.

Latest News on the Block

Disney has recently announced a live-action movie on Mulan. Some fans have addressed an online petition to Disney to cast an Asian heroine as Mulan instead of a white heroine.

The 1998 Disney movie ‘Mulan’ garnered worldwide popularity and acclaim. Anyone who has seen the movie or known Mulan as a ‘Disney Princess’ is curious to know whether she was a real person. Though the movie is too much ‘Disney-like’, employing comic fictional characters, the story is loosely based on the legend of Hua Mulan, a Chinese folklore. The story is said to have originated from an old Chinese poem called ‘The Ballad of Mulan’. However, on the basis of the poem, there have been many adaptations of the story of Mulan, and it has been an inspiration to many movies, television serials, songs, poems, books, etc. In China, she is a very popular heroine, and her story is known in every household.

In the following sections, we try to delve deeper into the story of Mulan, and determine whether her story is actually based on a real story.

Mulan, the legendary story of a female Chinese warrior, is originally based on a poem named as ‘The Ballad of Mulan’. It is not certain whether the legend is based on true events, though there might be a possibility that it is inspired from female warriors of those times. It is also not known for certain whether Hua Mulan was a real person, since there are different stories about her name and origin. Her story has been adapted into many poems, stories, movies, etc. There are different spelling versions too; some quote her name with a hyphen, whereas some do not. A statue of Hua Mulan is located at the ‘Chinese Garden’ of Singapore. There is also a Hua Mulan temple (first built in the Tang Dynasty) located in Yucheng County, Henan Province of China.

There is no proper historical evidence of her heroism, and the poem is the earliest known literary work about her. In some versions of her story, it is said, that she belonged to the Sui Dynasty, and after revealing her identity to the Emperor, he wanted her to be his concubine. She chose to end her life instead.

Mulan’s story has been retold in various literary works, but with different versions. Thus, there is no definite answer to this question as to whether Mulan is based on a true story!

Various Adaptations of the Story of Mulan

Story as Per the Poem ‘The Ballad of Mulan’

According to the poem, Mulan is actually worried that Khan has summoned a male member from every family, and she has no elder brother who will serve in her father’s place. Her father is too old, and she does not want him to be in the army. Hence, she disguises herself as a man and joins the army in place of her father. She continues to serve in the army for more than 10 years without revealing her identity of being a woman. After her loyal service, she is offered a reward. However, she humbly denies it, and asks for a mount to go back home. When she reaches home, she is greeted by her proud parents and siblings. It is only when she dons her old clothes, her fellow army men are flabbergasted when they come to know that their peer since 12 years is a woman.

Was Mulan a Princess?
Well, Mulan is not a ‘princess’ in the first place. She is an ordinary citizen, unlike other Disney princesses. Her name is ‘Fa Mulan’ in the movie. However, she is considered as one of the highly acclaimed Disney characters. She does not marry any prince nor is a princess by birth. Along with Mushu, the red dragon, she makes a dramatic exit from her house, cutting her hair, and stealing her father’s armor. When she joins the camp, she is an underdog, and Captain Li Shang asks her to leave the army, since she cannot perform ‘like a man’. However, when she proves her ability, she is accepted in the army. After an injury trying to save Li Shang’s life, it is revealed that she is actually a woman. However, Li Shang spares her and lets her go. Mulan learns that their enemies have survived, and are planning to attack the city. She bravely tries to combat the enemies with the help of Li Shang and other mates. She is later honored by the Emperor, and though he offers her a position, she refuses it and returns home. The Emperor hints Li Shang into considering Mulan as a potential life partner.

The movie was followed by a sequel that portrayed rifts between Mulan and Shang, and their eventual marriage, while performing an important task of escorting princesses of China.

Of course, there are a lot of differences between the Disney movie and the poem. In the poem, Mulan serves for almost 12 years in the army, without revealing that she is a woman. She also is trained in martial arts, and is already good at it. It might be based on a real story, or the ballad might have taken inspiration from female Chinese warriors of those times. Further, the character described in the poem appears to be much more confident than the ‘underdog’ displayed in the Disney movie. In the poem, she is not confused about her identity, and willingly tells her parents about joining the army. Many are of the opinion that Disney made far too many changes in the legendary story, to make it entertaining.

Feminists have also one thing about the legendary story that bothers them: When Mulan was offered an official position, why did she choose to deny it and go back to her home, back to her typical feminine responsibilities?

When a male member is summoned from every family to join the war, Hua Mu-lan is in a fix, since she does not want her old father to serve in the army for the sake of family honor. She convinces her father, disguises herself as a man, and serves in the army. To her dismay, she manages to impress the Commander-in-Chief so much that he sees ‘her’ as a prospective son-in-law.

This movie is set in a similar background, where she dresses as a man to serve in place of her father. However, when a search is ordered for a theft in the army camp, she falsely admits to committing the crime to protect her identity. When she is in jail, Wentai, the sub-commander, gets her released when she reveals the truth to him. As the army is preparing themselves from an attack from the Rouran tribes, Mulan and her troops try to bravely combat them.

Well, irrespective of whether Hua Mulan existed or not, we can take this truth from her story: gender stereotypes kill someone’s identity. A woman has equal rights to be herself, as men are. This legend proves every bit of it, reflecting a woman who fights for her father, her family’s glory, and her country. Though the Disney movie has many fictional elements, every daughter would dream for her father to say, “The greatest gift and honor is having you for my daughter.” (quoted by Mulan’s father in the Disney movie). There are many such women in history who have dared to overthrow traditional roles, and prove that they are not the ‘damsels in distress’ every time.