Elmer Fudd: The adorable eggheaded character from Looney Tunes who is eternally after hunting wabbits opps! rabbit a.k.a Bugs Bunny sure mouths some amusing lines. This Entertainism article lists out some classic Elmer Fudd quotes and sayings to laugh along with. 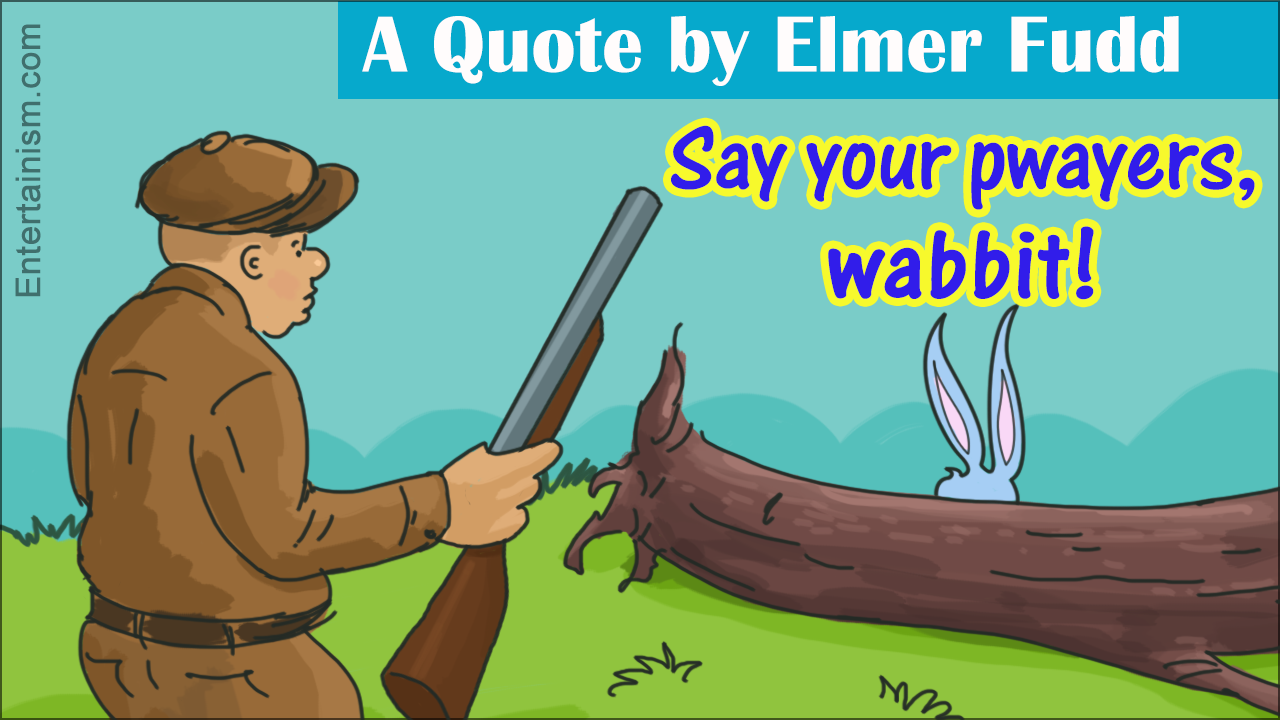 Elmer Fudd: The adorable eggheaded character from Looney Tunes who is eternally after hunting wabbits opps! rabbit a.k.a Bugs Bunny sure mouths some amusing lines. This Entertainism article lists out some classic Elmer Fudd quotes and sayings to laugh along with.

You can set your Google language to Elmer Fudd (for ‘wabbit searching season’ and you wouldn’t have to be ‘vewy, vewy quiet’ while hunting for your results). It is one of the comic languages that the search engine Google can be translated to.

In 1937, American animator and cartoonist Fred Avery introduced a new character having a bulb-shaped nose, freakish clothing and an egg-shaped head which earned it the famous moniker, ‘Egghead.’ Egghead later probably evolved into Elmer Fudd when it appeared in the cartoon A Feud There Was (1938) riding a motor-scooter with the words ‘Elmer Fudd, Peacemaker’ exhibited on the side.

From there on, the mirthful character of Elmer J. Fudd picked up as the poster hunter boy for the cartoon series Looney Tunes displaying an eternal vengeance for Bugs Bunny. The character was created by American animator and cartoonist Chuck Jones and officially debuted in the 1940 cartoon named Elmer’s Candid Camera. It was voiced by the legendary American radio personality and comedian Arthur Q. Bryan. The odd way of replacing Rs and Ls with Ws, the signature catchphrase ‘Be vewy vewy quiet, I’m hunting wabbits’, and Elmer’s trademark laughter, ‘huh-uh-uh-uh-uh-uh-uh-uh’ make the character a whimsical masterpiece.

Given below are his queer, rib-tickling, quotes which you can enjoy while he goes chasing wabbits!

Incredible Fudd Facts
★ Elmer’s character first officially debuted in A Wild Hare in 1940 in which he appeared wearing a hunting outfit along with Bugs Bunny. Shortly after this Elmer’s appearance changed to being chubby; however, after four cartoons the character was changed back to its original design.

★ Comedian and actor Robin Williams performed a famous sketch as Elmer Fudd when he sang the Bruce Springsteen song “Fire.”

★ Conservative commentator Rush Limbaugh once uttered his discontent with Republican candidate Mitt Romney in a radio broadcast saying,”I know that Romney ticks you off. He might as well be Elmer Fudd as far as we’re concerned. We’re voting against Obama.” This lead to a funny YouTube video, Limbaugh: Elmer Fudd replaces Romney.

Wacky Elmer Fudd Quotes
Be vewy vewy quiet, I’m hunting wabbits!, He-e-e-e-e!
Come over here you scwewy wabbit.
Say your pwayers, wabbit!
Why, you wascally wabbit!
Okay you cruddy rabbit, I know you’re in there, come on out.
My name is Elmer J. Fudd. Miwwionaire. I own a mansion and a yacht.
West and wewaxation at wast!
Gee, I hope it didn’t hurt too much when I killed you, Mister Wabbit.
Oh boy! Rabbit tracks! There’s something screwy around here.
Just wait till I get my hands on that scwewy wabbit and that scwewball duck!
You’re no shewiff! You’re that scwewy wabbit!
Wisten to the whythmic whythm of the woodwinds as it wowws awound and awound…and it comes out here!
WHAT?! A Buck Wogers Wightning Quick Wabbit Kiwwer!
But I haven’t got a wiscence to shoot a fwicaseeing wabbit.
Hewwo! Acme Pest Contwol? Weww I have a pest I want contwolled.
Any time those two wittle nut cwackers think they can out-smart Ewmer J. Fudd they’ve got another thing coming.
Come on, Wover boy. Wet’s go hunting.
I hope you can hewp me mister game warden. I’ve been towd I can shoot wabbits, mongooses, pigeons, dirty skunks and ducks. Can you teww me what season it weawwy is??!!
Good evening, sportsmen evewywhere…’Fwesh-Fwied, Fwesh-Fwozen Wabbit Company’ bwings you ‘The Sportsman’s Hour,’ with handy hunting tips by yours twuwy, Ewmer Fudd!…….And today I have a WEAL surpwise for you: I will demonstwate the pwoper pwocedure for hunting, twacking down and bwasting to smitheweens a weal, wive wabbit!…Now, be vewy, vewy quiet…
KILL THE WABBIT! KILL THE WABBIT!
Geez awfully quiet dang I wonder if there anymore hunters out here this mornin’
Not this weekend, you’re not! You’re the symbol of Thanksgiving! Huhuhuhuhu! And you’re dinner!
But you wang my phone operator. Oh yes, my phone went RIIIIIIIINNNNNGGGGGGG.
I’ve got you now you rabbit. I’m gonna blow you into a million rabbit cutlets.
You’ll never take me alive!

And while you were getting to figure out what Elmer actually means to say Bugs Bunny has outwitted him again (sigh):