How Celebrity Culture Affects Our Society

As the consumption of mass communication has increased with each passing day, so is the influence of what is sold on it. The constant bombardment of celebrity lives has made most of us relate to them, more than we relate to our friends or neighbors. Let's try to understand the impact of celebrity culture on society.

As the consumption of mass communication has increased with each passing day, so is the influence of what is sold on it. The constant bombardment of celebrity lives has made most of us relate to them, more than we relate to our friends or neighbors. Let’s try to understand the impact of celebrity culture on society.

Fame is not the glory! Virtue is the goal, and fame only a messenger, to bring more to the fold.”
― Vanna Bonta, Degrees: Thought Capsules

We are no different from the list of famous celebrities we closely follow. One reason why we so tightly associate with celebrities is because, they are reflections of what we want to be. The fancy lifestyles, perfect hair days, stylish clothing, late-night parties, dates with paparazzi, and the glitz and glamor of it all are secretly sought by many of us. How could we not be fascinated by them? After all, they bring us the news of impossible amounts of fun with our morning cup of coffee.

Interestingly, celebrities seem to affect our lives quite intensely and unknowingly. Their social behavior is so deeply entrenched in our psyche, that it is worth understanding how it affects our lives.

This is the first sign which shows how we are affected by the celebrity culture around us. We are truly delighted to know the miseries of others. And when it comes to our dear celebrities, it becomes even more difficult to not indulge. How many times has it happened that we have truly enjoyed watching and reveling in the happiness of a celebrity? Rarely! However, the moment the news items read ‘divorce’, we are all following the news for the next couple of months to come. And if that is not enough, we also track their crashing love affairs through trends on social networking sites. But we don’t just stop here. There are quite a few of us, who check entertainment sites, as though they are our daily newspapers. At this juncture, we can safely say that celebrity news has become the only fodder for our intellect, stunting our conversations and limiting our imaginations.

Voyeurism is a Sport

Miley Cyrus has come a long way since Hannah Montana. Yes, she sure has! Her recent performance at the MTV Video Music Awards remains clearly controversial. The strip down to a nude bikini, followed by gyrating hips moves, and the infamous foam finger have left the celebrity world, too, in a shock. We not only love the miseries of our beloved celebrities, but are also affected by their portrayal of sexualized behavior. The young generation, in a hurry to grow up, has become the gullible prey. The effect of overexposure to sexual content on televisions, magazines, movies, video games, and such other avenues for audio-visual entertainment has truly resulted in voyeurism as a sport. This has made many of us doubt our body images, the way we dress, what food we eat, how much do we spend, and what others think of us.

What did you truly feel when Britney Spears divorced her childhood friend Jason Allen Alexander in just 55 hours? There was hardly any sadness felt. The feeling best described is “that stupid blonde”! To us, celebrities are nothing more than a source of entertainment. Sadly, the alarming rate at which we keep witnessing these personal catastrophes has resulted in complete loss of empathy or sympathy towards these people. This callous attitude has also crept into our lives, making it difficult for us to sustain the relationships we have, purely given into hedonistic pursuits.

Yes! Weight and its issues haunt each one of us, but in different ways. Talk about diet, and we are searching the Internet for celebrity diets. What we truly care about is whether we can look like the celebrities. It hardly matters to us, whether the diet suits our body type or need. The world today is so obsessed with the way it looks, that it would give anything to look like its favorite celebrities. We are influenced by the celebrities in the way we look, what we eat, how much we weigh, and everything that builds our body image.

It is not even funny how closely Kate Middleton and Kim Kardashian were photographed during their pregnancies. From what they wore to how much they weighed, the paparazzi provided the world with every tiny detail of their move. A sacred time like pregnancy is heavily influenced by the way celebrities experience motherhood. For instance, the number of births via cesarean section increased, as more and more celebrities resorted to this method. Elizabeth Hurley, Madonna, and Angelina Jolie are some of the celebrities who have given birth this way. Besides the actual birth, the ideas of losing weight post the birth of a baby are also heavily influenced by our celebrities. When new mothers look at celebrities moms who have slimmed down in a matter of months, it sends them in an emotional tailspin. It affects their self-esteem in a negative way. However, what they fail to understand is that, regular moms do not have the luxury of dedicating hours to working out, like our celebrity moms do.

But this is not all. When Larry King gives up smoking because he has a heart attack, he inspires people to think. When Teri Hatcher talks about being sexually abused as a child, it becomes a lot easier for us to accept that it happened to us as well. When Catherine Zeta-Jones gets diagnosed for bipolar disorder, we are no longer ashamed of it happening to us. Thus, the celebrity culture also affects us in a positive way. It is because we relate to our celebrities more than we do to our friends and family, that sometimes we are humbled by their acts. At times, we are motivated to do a good deed, just because our favorite celebrity is supporting a cause. Most importantly, we relearn a few things we forget along the way, while growing up; just like Keeping Up with the Kardashians can sometimes show the importance of family, while you are too busy building your career. 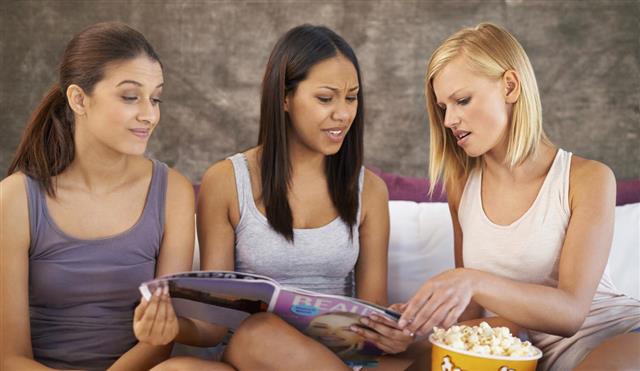