Those who have read J. R. R. Tolkien's "The Hobbit" and its sequel, "The Lord of the Rings", know that Gollum plays an integral part in the series. Entertainism highlights 27 of the best quotes by Gollum that give us a glimpse of the character. 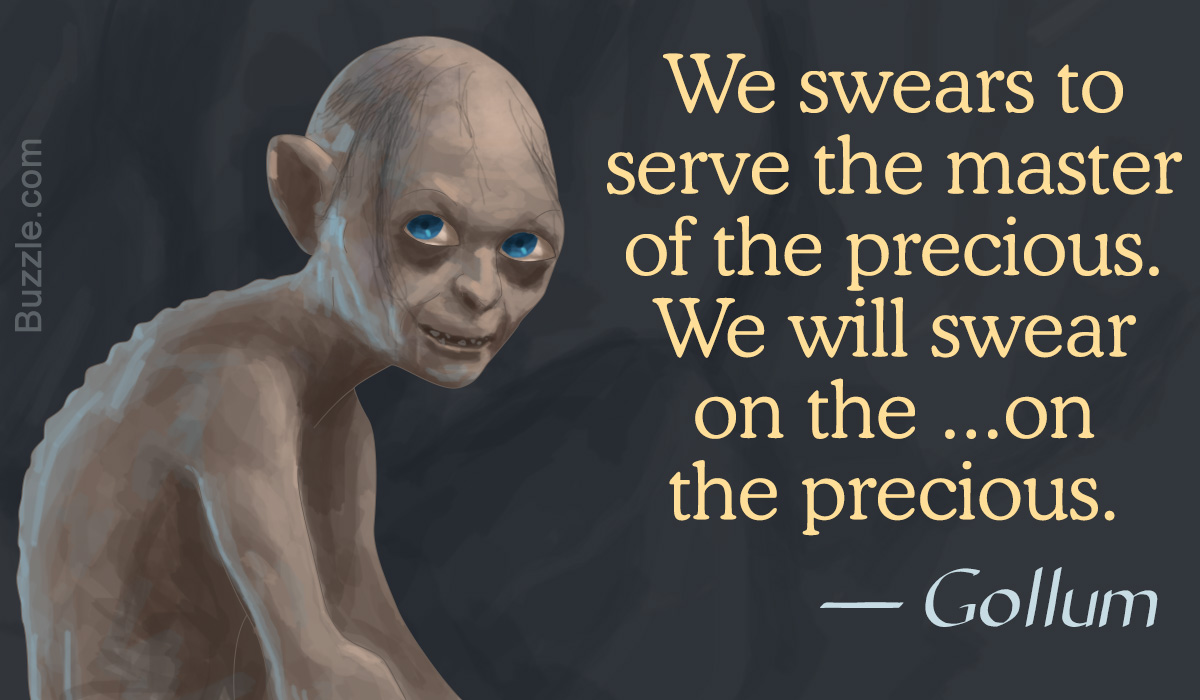 Those who have read J. R. R. Tolkien’s "The Hobbit" and its sequel, "The Lord of the Rings", know that Gollum plays an integral part in the series. Entertainism highlights 27 of the best quotes by Gollum that give us a glimpse of the character.

In order to bring the character of Gollum to life, Andy Serkis had to shoot every scene twice wearing a Lycra bodysuit covered with sensors―first with the actors in front of the camera, and second with giving voice to the character behind the camera.

Originally known as Sméagol, Gollum was a Stoor Hobbit of the River-folk. He is estimated to have been born in the year TA 2430, and died on March 25, 3019. This unusually long life was only possible because he possessed the One Ring.

Being one of the most essential characters to give shape to the story, Gollum has left an everlasting impression on our hearts. Keeping that in mind, we move on to bringing you some of the most popular and remarkable quotes by Gollum.

Even though the first movie was released in the year 2001, fans across the globe haven’t forgotten their favorite lines by this remarkable  character from The LOTR  and The Hobbit: An Unexpected Journey  movies.

The Hobbit: An Unexpected Journey

Firstly, the character of Gollum was introduced in The Hobbit  where we see him living on an island in the middle of an underground lake. This lake is underneath the Misty Mountains. Bilbo Baggins meets Gollum for the first time in the mountains. Bilbo finds the One Ring that drops from Gollum’s possession. Upon asking Gollum a way out, the latter agrees to show him the way if he wins the game of riddles.

“Bagginses? What is a Bagginses, precious?”

“We like goblinses, batses and fishes. But we hasn’t tried Hobbitses before. Is it soft? Is it juicy?”

Gollum – “And if it loses? What then?”
Sméagol – “Well, if it loses, precious, then we eats it! If Baggins loses, we eats it whole.”

“What has it got in its nasty little pocketses?”

“Curse us and splash us! My precious is lost!”

“Curse it and crush it! We hates it forever!”

Barely making an entrance in the first installment of The Lord of the Rings trilogy, we find out that he gets captured by Sauron’s forces and is tortured to reveal where the One Ring is. Gollum then tells Sauron the names, “Shire” and “Baggins”. Later in the movie, we see that Frodo notices someone following them into the dwarf Mines of Moria. It is then, Gandalf the Grey who explains what had happened to Gollum, and how the One Ring destroyed him.

The Lord of the Rings: The Two Towers

After getting separated from the Fellowship, Frodo and Sam continue their journey to Mordor. Gollum still in pursuit, tries to attack them one night when they are asleep; however, the two hobbits catch him. Frodo pities him and asks Gollum to show them the way to Mordor. Throughout the second installment, we see Gollum struggling to be loyal to Frodo while still being consumed by the need for the One Ring.

“We be nice to them if they be nice to us. Take it off us.
We swears to do what you wants. We swears.”

“I found it, I did. The way through the marshes. Orcs don’t use it. Orcs don’t know it. They go around for miles and miles. Come quickly. Soft and quick as shadows we must be.”

“Master should be resting. Master needs to keep up his strength.”

“Master says to show him the way into Mordor. So good Sméagol does, master says so.”

“We wants it. We needs it. Must have the precious. They stole it from us. Sneaky little Hobbitses. Wicked. Tricksy. False.”

“Give it to us raw and wriggling. You keep nasty chips.”

“Wicked Men. Servants of Sauron. They are called to Mordor. The Dark One is gathering all armies to him. It won’t be long now. He will soon be ready.”

“Master betrayed us. Wicked. Tricksy. False. We ought to wring his filthy little neck. Kill him! Kill him! Kill them both. And then we take the precious and we be the master!”

The Lord of the Rings: The Return of the King

The final installment begins with the scene about how Sméagol murders Déagol, and takes the One Ring for himself. Later in the movie, we see Gollum trying separate Frodo and Sam by manipulating Frodo. Gollum also has a big part to play in the climax of the trilogy (explained in the conclusion).

“What’s it saying, my Precious, my love? Is Sméagol losing his nerve??”

“The Precious will be ours, once the Hobbitses are dead!”

“Why does he hates poor Sméagol? What has Sméagol ever done to him? Master?”

“He wants it – he needs it! Sméagol sees it in his eyes. Very soon, he will ask you for it – you will see … the Fat One will take it from you.”

“What’s this? Crumbs on his jacketses! He took it! He took it! I seen him, he’s always stuffing his face when Master’s not looking!”

“Naughty little fly, why does it cry? Caught in her web, soon you’ll be…eaten!”

At the time of his death, Gollum was around 589 years old. He knocks Samwise Gamgee with a rock, and attacks Frodo Baggins with a rock while he is invisible. After fighting with each other, Gollum bites Frodo’s finger off with the ring on it and slips off the edge of the Crack of Doom. He falls into the fires of Mount Doom with the One Ring, and dies; destroying the very thing he desired the most.