A Brief Biography of the Talented and Insanely Funny Eddie Murphy

He is funny and hilarious and is one of the greatest stand-up comedians. A talented actor that he is, he can pull off multiple roles with ease. Not just another rags-to-riches story, these are the adventures of Eddie Murphy... 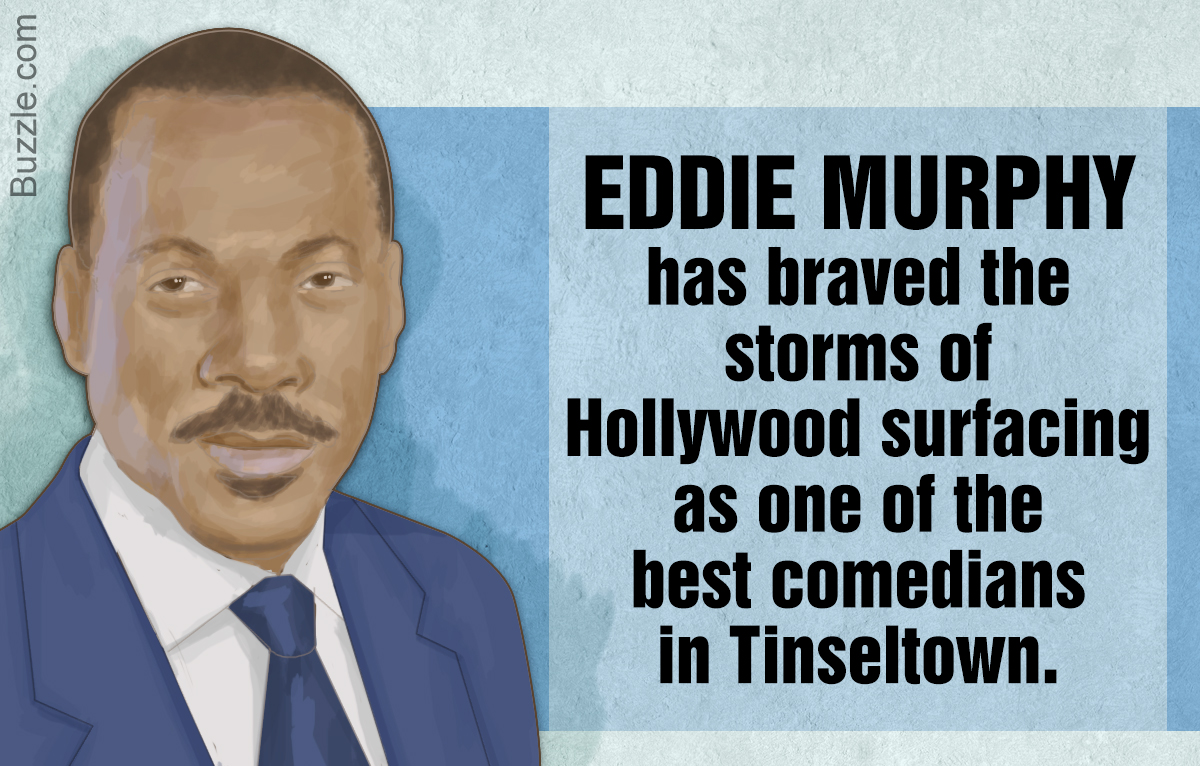 He is funny and hilarious and is one of the greatest stand-up comedians. A talented actor that he is, he can pull off multiple roles with ease. Not just another rags-to-riches story, these are the adventures of Eddie Murphy…

A gifted mimic and impersonator, acting comes naturally to this actor, who has created a niche for himself in the genre of comedy. An influential comedian of the 80’s, Eddie Murphy has influenced a new wave of Afro-American comedians. Murphy, who kick started his career by writing and performing gags at youth centers and local bars, landed as a backup performer on Saturday Night Live. Popularity and stardom not withstanding, Murphy’s career graph rose and fell, so it goes to say, he has tasted the highs and lows of life.

A Glimpse of Ed’s Life

Edward ‘Eddie’ Murphy, the son of Charles Edward Murphy, a police officer, and Lillian Murphy, a telephone operator, was born on April 3, 1961 in Bushwick. His parents divorced when he was three, following which he lived with his mother and elder brother Charles Q Murphy. Owing to his mother’s illness, Murphy and his brother had to resign to foster care for over a year. Eddie Murphy says that he used the time at the foster home to catapult his sense of humor. His mother then married Vernon Lynch, after which the family shifted base to Roosevelt, Long Island.

In his formative years, Murphy spent hours in front of the television, devouring old movies and cartoons, thus developing a flair for impersonating, by mimicking Bugs Bunny, Bullwinkle and Sylvester. He enrolled at the Roosevelt High School, where he rose in popularity, thanks to his briefcase full of joke-books. On his mother’s request, Murphy joined the Nassau Community College while he worked part-time as a shoe store clerk.

Murphy married Nicole Mitchell in 1993, after courting her for over a period of five years. Murphy and Nicole, however, divorced in 2006, following which he dated Spice Girl Melanie Brown. He married Tracey Edmonds in 2008 in a private ceremony off Bora Bora islands. He is the father of five children with Mitchell, he also has two sons – with Tamara Hood and Paulette McNeely – and a daughter with Melanie Brown.

Murphy’s philanthropic work includes donating money to the AIDS Foundation, and a number of other charities. Murphy has donated to the Martin Luther King Jr. Center fund, besides, he has also donated a hundred thousand dollars to the Screen Actors Guild’s strike relief fund.

Making the Most of Life

Starting his career as an extra, Murphy steadily climbed the ladder of success, becoming a household name with Saturday Night Live. Known as the King of 80s comedy, Murphy won the role in the classic 48 Hrs, where he co-starred with Nick Nolte. His role earned him a whopping $1 million making him the first actor to be paid that amount on a debut. This was followed by John Landis’ colossal hit comedy Trading Places which cemented Murphy’s pact with Hollywood. In Beverly Hills Cop he essayed the role of a bad boy-good cop which earned him a Golden Globe Nomination. Post his success of Beverly Hills Cop, he launched his album How Could it Be?, produced by Rick James. His next movie Best Defense turned out to be a huge disappointment, Murphy himself was found joining the bashing of the movie on SNL. This was followed by a role in the supernatural comedy The Golden Child, which offered Murphy a change of pace from the street smart settings of his other movies.

He debuted as a director with Harlem Nights which was considered to be a major failure. Coming to America proved to be the highlight of Murphy’s career, where he wooed the audience with his portrayal of multiple characters. The movie went on to be a smash hit grossing more than $128 million in the U.S. alone. His next movie Another 48 Hours did not meet the same standards as his career debut of 48 hrs, post which he took a hiatus from Hollywood. He then appeared in Boomerang with which he aimed to resurrect his persona and career. He went back to his forte with The Nutty Professor in 1996, in which he marvelously juggled multiple roles. His role of the Professor tickled many a funny bone and won him critical acclaim while managing to strike the emotional chord with some others. His career graph fell again post the success of The Nutty Professor, with Metro and Holy Man. Bowfinger seemingly seemed to raise the graph, winning him critical acclaim but this too was short-lived and it fizzled out with the jail-house comedy of 1999, titled Life.

A series of mishaps followed, and Murphy never seemed to redeem his lost status. His fall, however, was broken with Disney coming to the rescue and offering him the role of voice actor for its animation movies. Kick starting his plummeting career with Disney’s Doctor Dolittle and Mulan, he garnered popularity with a new set of audience – children. Taking up the role of the voice actor for the popular Shrek series, Murphy became known as a family friendly man. Sticking to this genre, he starred in family comedies like Daddy Day Care, Norbit, Meet Dave and Imagine That. He then went on to star in movies like Tower Heist which released in 2011, and A Thousand Words in which he plays the role of a literary agent who uses his mouth to get various book deals.

From gags, to movies, to being a voice actor, Eddie Murphy has braved the storms of Hollywood surfacing as one of the best comedians in Tinseltown. Some would even agree with others who say he is a legend of a kind.